Let’s go back to the Castles of Romeo and Juliet in Montecchio Maggiore and take part to the Faida, a Medieval Festival inspired by the Tragedy of the two star-crossed lovers. 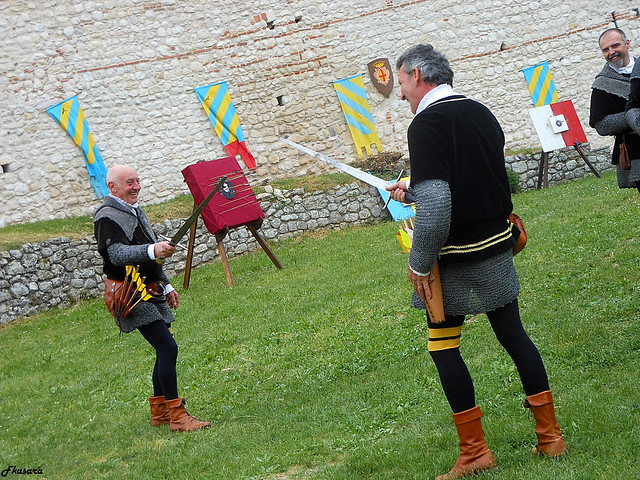 This post is part of the DolcevitaBloggers linkup organized by Kelly, Jasmine and Kristie.

Romeo and Juliet are two literary figures that in my region, the Veneto, inspire a peculiar sentiment of rivalry: almost like the invention of the Tiramisù, fought over between Treviso and the Friuli, the alleged presence of the young lovers is claimed by different towns. The biggest part is obviously played by the fair Verona, where Shakespeare’s play takes place, but the locations involved in the story, according to the word-of-mouth, are several. One of them is the town of Montecchio Maggiore.

As I explained in a previous post, the story was not originally written by the Bard, but by Luigi da Porto, a former soldier retired in a Venetian villa located in a town in the province of Vicenza called Montorso (there’s documented proof about this). Montorso is located just in front of Montecchio Maggiore and, since Da Porto could allegedly see the two castles of said town standing from his villa, he was inspired by their view when writing his story of love, hate and death. 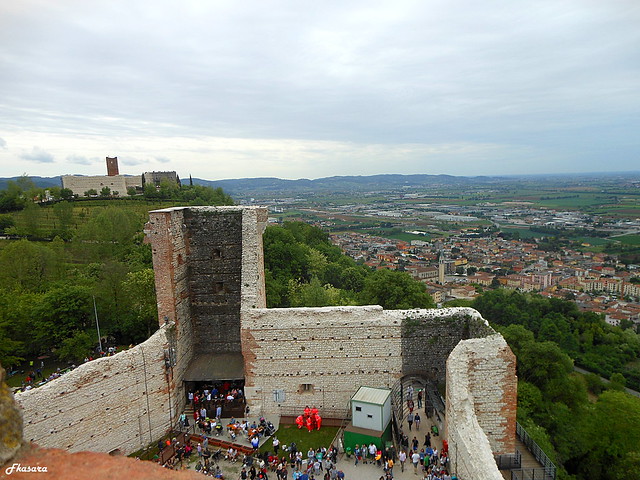 Some people say he invented it, some others that he reported real facts, but we will never know for sure. The only certain elements recalling history and the content of the story are the castles’ ownership of the Scaligers, the famous Lords of Verona also mentioned in the Tragedy, and the name of the town, Montecchio Maggiore, which clearly calls to mind Montecchi (translated as Montagues in English), the household of Romeo. For the rest, as Francesco, the gatekeeper of Romeo’s castle and the last repository of the local oral tradition likes to mention, in every legend there’s a part of truth.

If you come from a place with a long history and a wide repertoire of customs, traditions and legends, you know that sometimes the most important thing for local people is not discovering how much truth there is behind  a certain story (that’s the historians’ job), but passing said ancient heritage to the new generations and cultivating those customs through festivals and fairs, which are not only useful to increment tourism, but also to create a sense of community.

For this reason, if you’re going to visit a Medieval town, you should check if it has Medieval local festivals going on and join them. Not all these festivals are official re-enactments, and hence reliable in terms of history, but they are a great opportunity to enjoy yourself and see how a small community works together to offer such a thing to the public.

One of these opportunities is presented by Montecchio Maggiore every first day of May (which is bank holiday in Italy) with the so-called Faida (feud) between Montagues and Capulets. 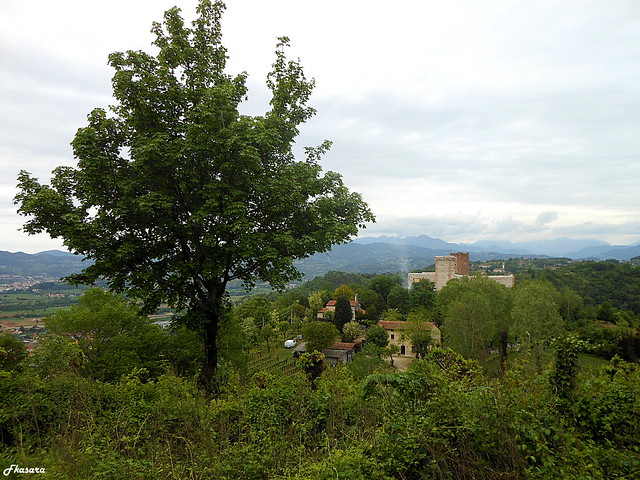 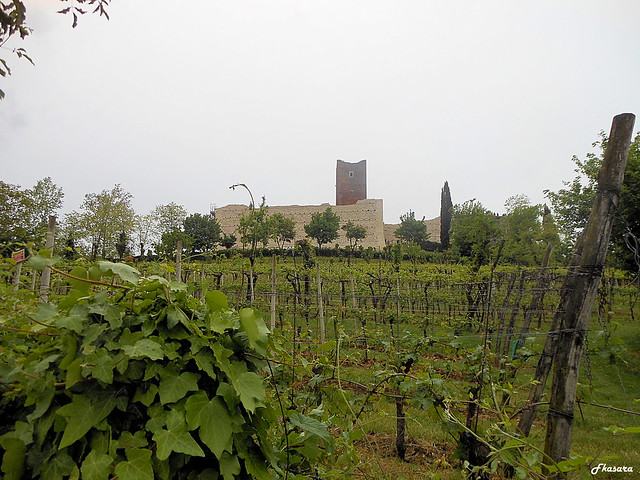 The Faida of Montecchio Maggiore is a festival that takes place on the hills of the town where the famous castles are located. There’s a series of events hosted inside the courtyard of Castello della Villa, the alleged castle of Romeo. Outside the walls of the castles there are also many stalls that display and/or sell both products of local craftsmanship and Medieval-inspired stuff. 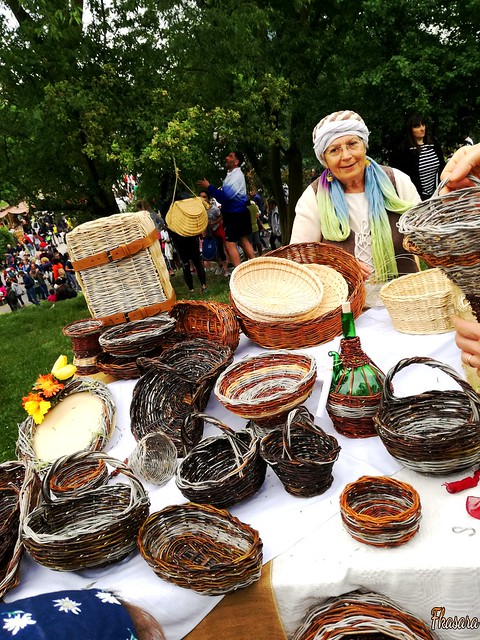 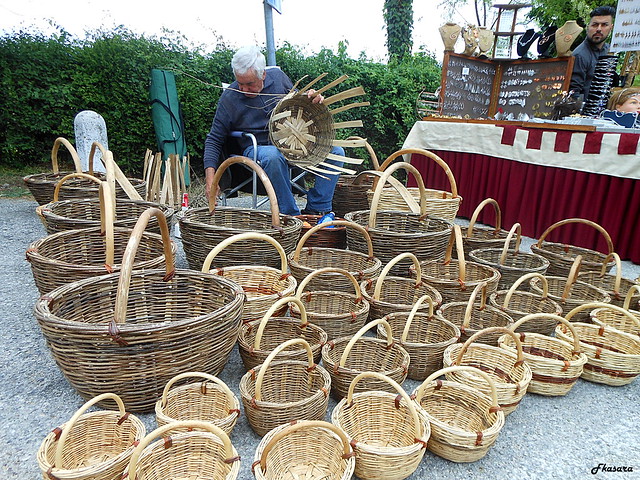 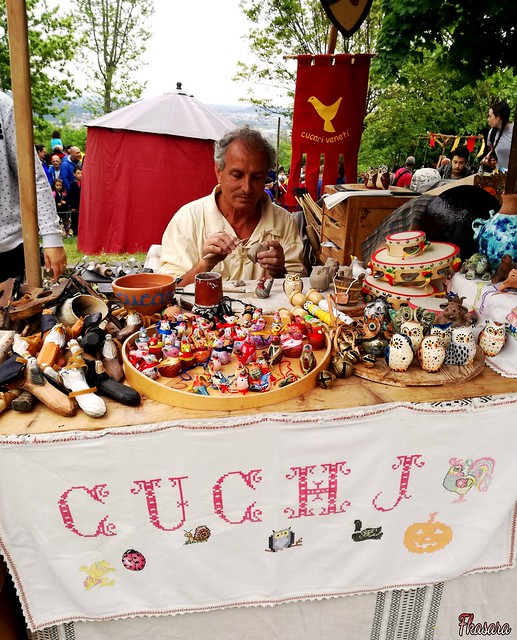 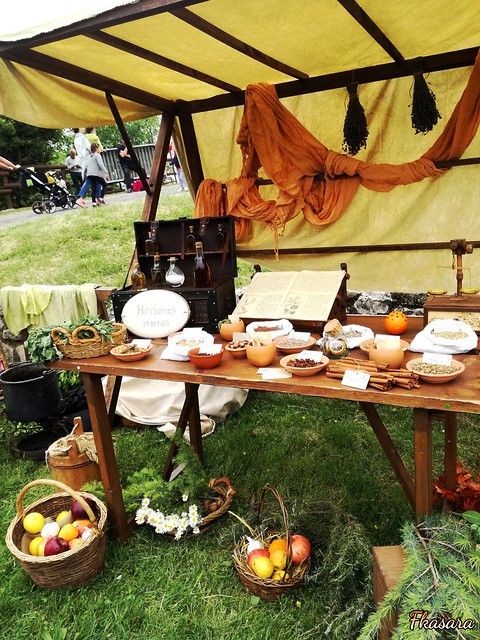 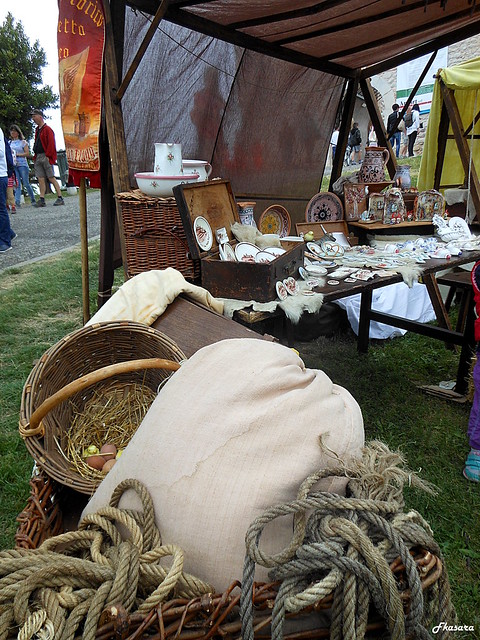 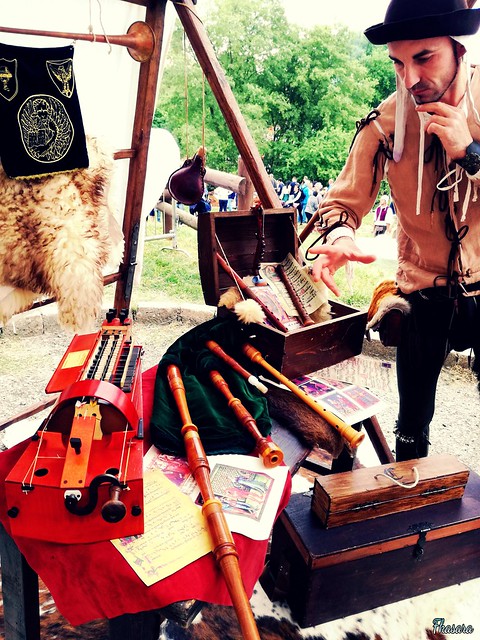 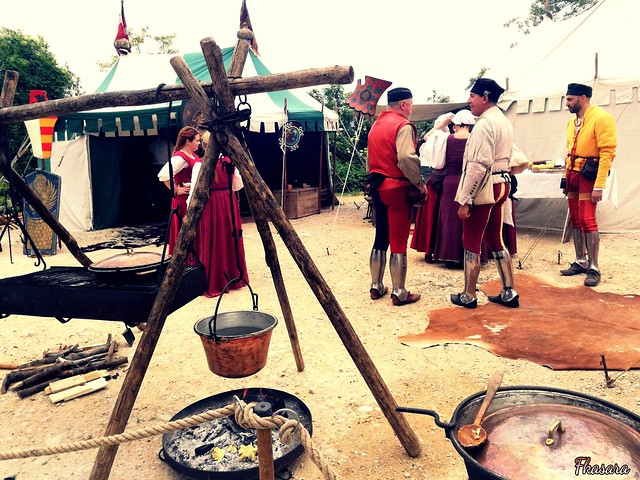 EVENTS OF THE FAIDA 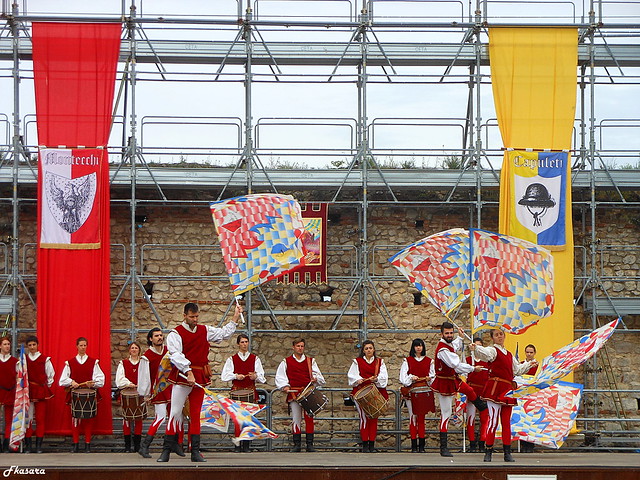 Sbandieratori, literally “flag-throwers”, used to be employed in Medieval times especially in Northern Italy in the battlefields, to signal to their companions, through specific “movements”, the ideal moment to attack or important information about the opponents.

Sbandieratori were supposed to protect their flags at all costs and not to reveal their “code” to their enemies in the case they ended up being captured by them. 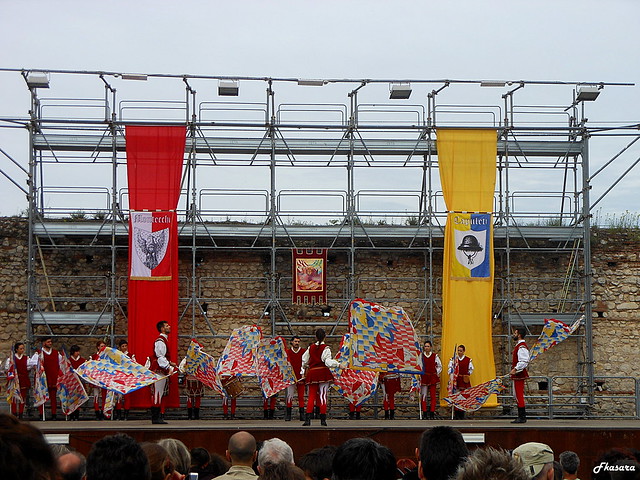 Montecchio Maggiore has a group of local sbandieratori that re-enacts numbers of flag-throwing to entertain the public during such festivals. 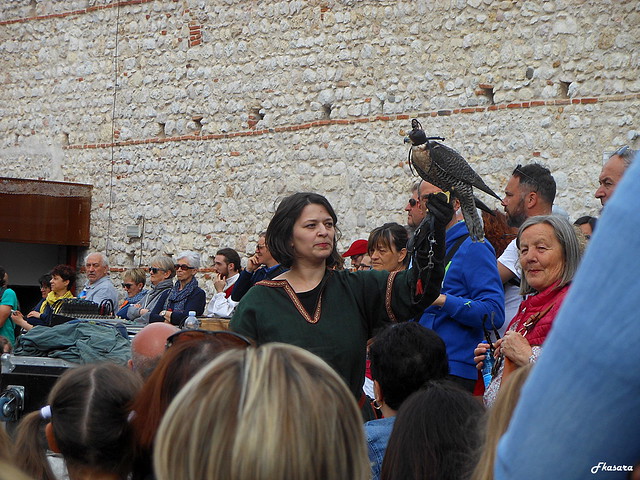 Falconry is a form of hunting by means of a trained bird of prey that, unlike other corners of the world, started to be employed in Europe only during Medieval times.

Nowadays falconry is practised in Medieval towns during such festivals, but even in airports to hunt birds that often dangerously fly in the proximity of aircrafts. 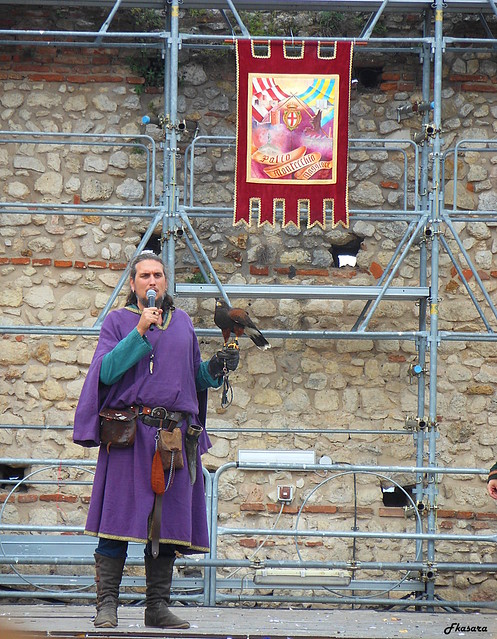 In Montecchio Maggiore we could enjoy a number of falconry, along with a very interesting lesson about it, when certain myths about this discipline were debunked and we were told about the work these people are doing to protect endangered species.

“DANCE OF THE RIBBONS” 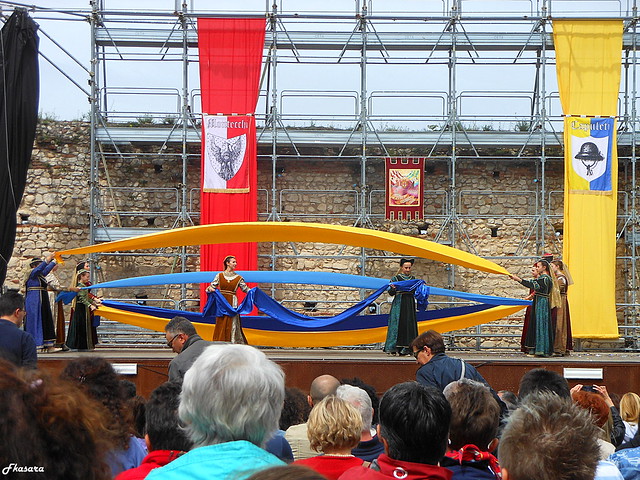 During such festivals, associations of other Medieval towns are often invited to perform. This was the case of Montavio (Marche region), that performed numbers of archery and the ladies’ Dance of the Ribbons. 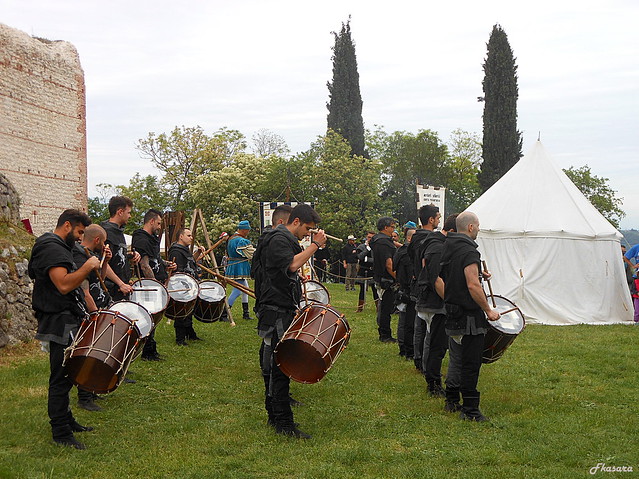 The association of the town of Brisighella in Romagna was invited to perform with the drums. 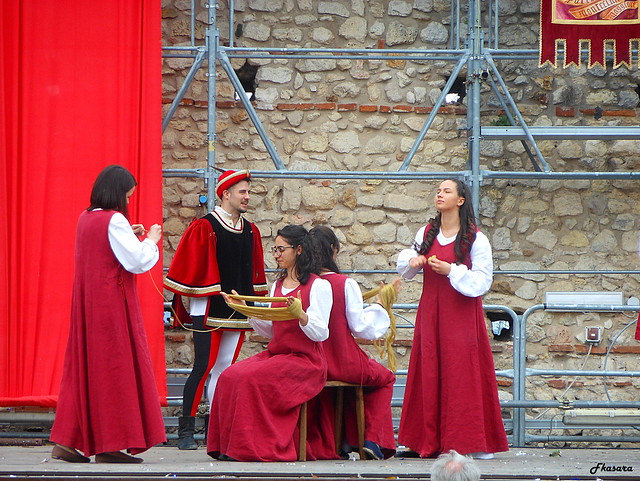 Every year, during the Festival, a Romeo and a Juliet are chosen through a contest. 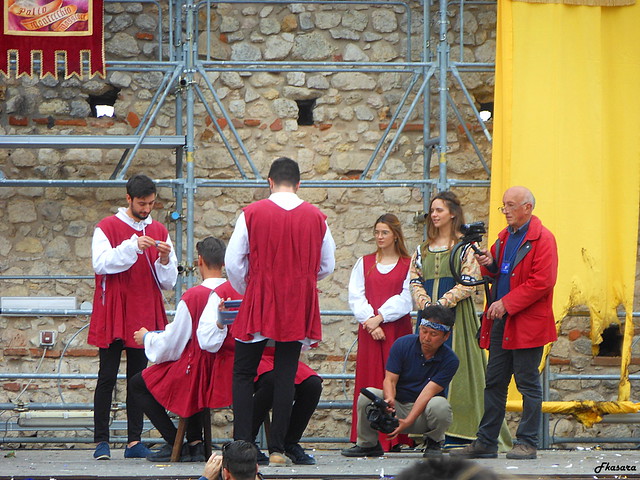 The Faida of Montecchio Maggiore is such a great opportunity to experience the sense of community of a small Medieval town and to do something exciting with the whole family. Kids enjoy a great deal playing with little wooden swords, shields and wearing flower crowns. 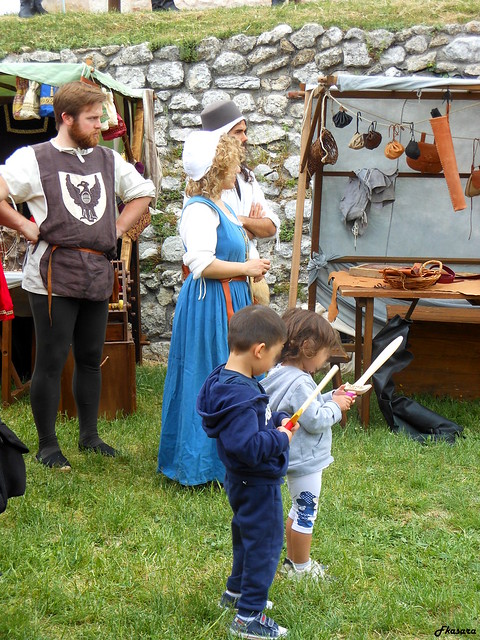 When: every May 1st, bank holiday in Italy

Notes: that day the car access to the hills where the castles are located is prohibited. You can walk to reach the site or take a shuttle that usually leaves from the car park in Via degli Alberi and from the one of the firm Xylem.

This post is part of the Dolcevitabloggers linkup focused on Italian hidden gems. This event of Montecchio Maggiore is usually attended only by Italians and I think it deserves to be discovered and promoted more. I hope you enjoyed it, check how to participate to the linkup by clicking the pink badge below.

19 thoughts on “Italian Medieval Festivals: the Feud between Montagues and Capulets in Montecchio Maggiore”