Italy is often depicted as an ambiguous country and Vicenza is obviously no different. As we often say in here, “it has multiple lives as the cats” and polar opposite characteristics coexist without too much of a hassle.With this series of posts about Vicenza, I will try to underline the city’s “split personality”, by identifying the major paradoxes you can find in its layered territory. 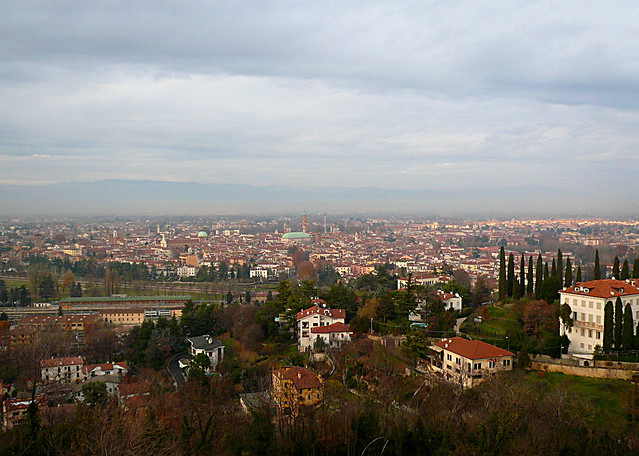 As they often say, in order to truly understand a city, you have to observe it from above. Watching from a distance is what allows an overall impression and the opportunity to catch elements which are often overlooked once you find yourself IN the city.

The best place that allows you that in Vicenza is, without a doubt, Monte Berico, a hill located in the southern part of the city. 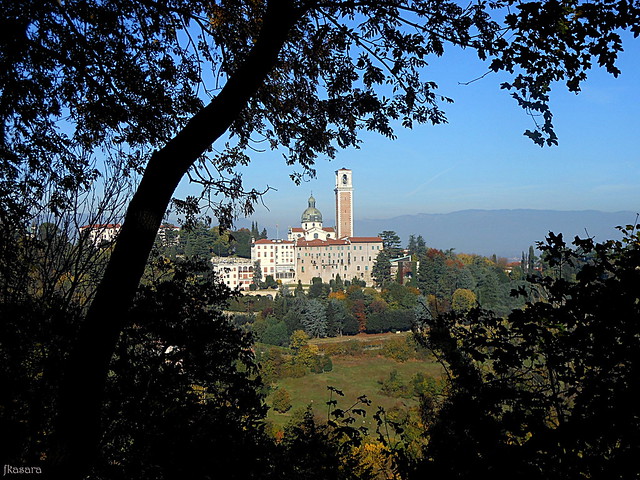 “Piazzale della Vittoria” (Piazza of Victory), a fascist opera constructed in honour of the victims of WWI, serves as an “observation platform” upon the whole territory and it helps you understand how layered it is and to underline one of its first juxtapositions: 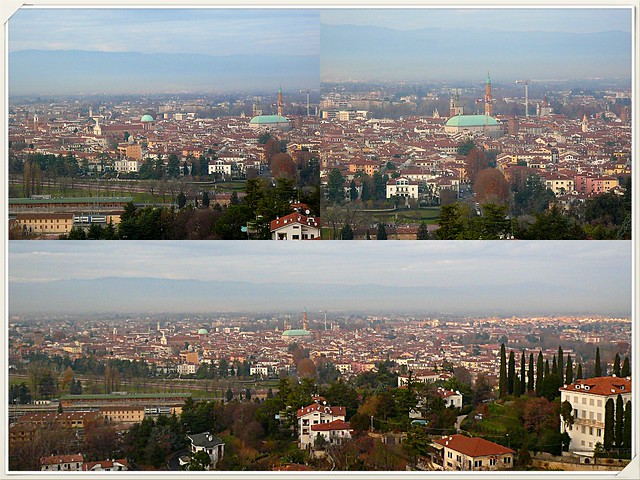 Just below the natural panoramic point of view which is Monte Berico, there is Vicenza, this Renaissance marvel designed by Palladio – known as the greatest architect of all the times – and described as one of the most industrious city of Italy. At a first analysis, you can notice the city centre characterized by bell towers and peculiar greenish roofs: those are the roofs of Duomo and Basilica Palladiana, the monument which is officially the symbol of Vicenza.

In the outskirts, which sadly you can’t fully appreciate in the previous photo because of the fog, you can find hills, the Small Dolomites and Altopiano dei Sette Comuni, which is said to be the most beautiful plateau in the world. In these realities, life is a little bit different in comparison with the city life in the centre of Vicenza and I will dig more in it in following posts, as the rural environment is the one where I grew up in.

But the juxtaposition I want to focus on in this entry, the one that involves Monte Berico firsthand is the following:

“You are like devil and holy water”, as we usually say in Italy to describe two people who are polar opposite, one good and the other bad. I would use this expression for Vicenza as well, as it sort of incorporates these two “souls” within itself.

Military speaking, Vicenza has always had a strategic position, so, in its history it has always been theatre of violent bloodsheds: just speaking about the last two centuries it has seen the Revolutions of 1848 against Austrians and the two World Wars in the 20th century. The courage of the common people who were also involved in these battles for the liberation of the territory is what has allowed the city to obtain two Gold Medals of Military Valour, the only case in the whole country.

Concerning the “holy” side of Vicenza, let’s just say that it used to be known in the entire country as the “the Sacristy of Italy” for the high number of churchgoers present in its territory. I think we have also some sort of record concerning the number of missionaries.

The duality between “good and bad” is especially evident in Monte Berico, where both these souls are visible. 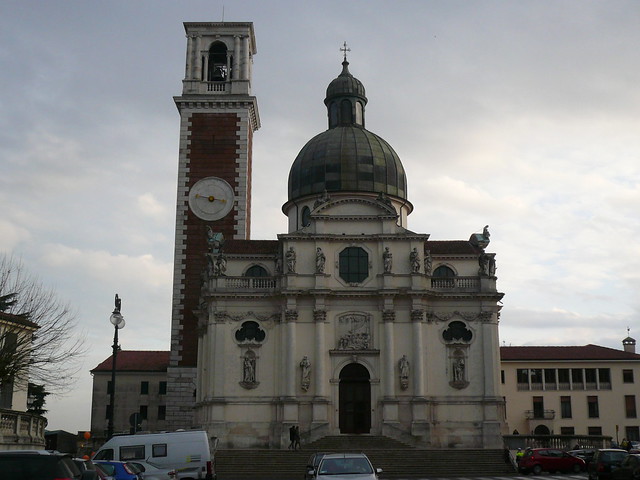 On top of Monte Berico, just opposite the famous “observation platform” of Piazzale della Vittoria, there is  the Sanctuary of Monte Berico, a Palladian church dedicated to Holy Mary, the mother of Christ. 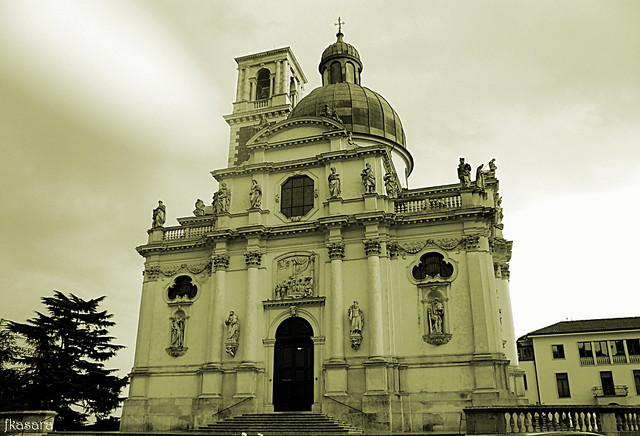 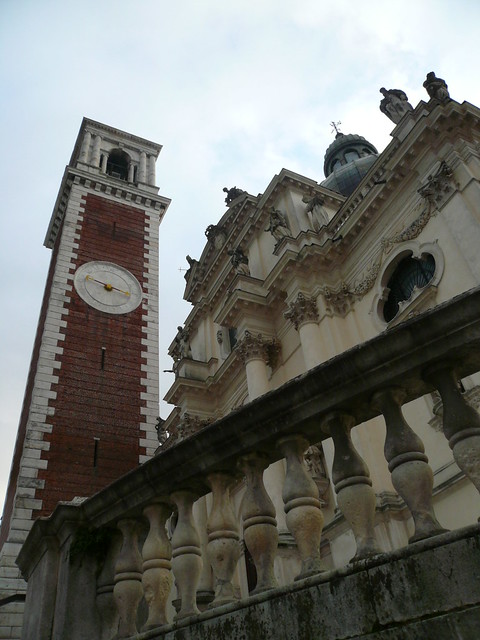 It was the 14th century, when in Europe the terrible “black plague” was decimating the population. The following century even Vicenza was hit by a terrible disease and thousands of people were losing their lives. In this terrible circumstance, a humble woman who used to labour the land for a living, had an “apparizione mariana”, that, as to explain to non-catholics, is some sort of “mystic vision” some people claim to experience.

For Christians the figure of Mary, the mother of Jesus Christ, is an ‘intermediary’ or medium between people and God and so when mystics have these revelations, they usually assert they see her and that she gives messages to be shared with the rest of the population.

This is what that woman claimed it happened to her and she also added that the Virgin Mary told her to encourage people to build a church dedicated to her if they wanted the plague to stop spreading. After an initial scepticism of the authorities, they started to build a church in the exact spot the Virgin had indicated by drawing the perimeter with a stick ( yes, really ) and, thanks to faith or good fortune, the plague progressively started to recede until its total expiration. 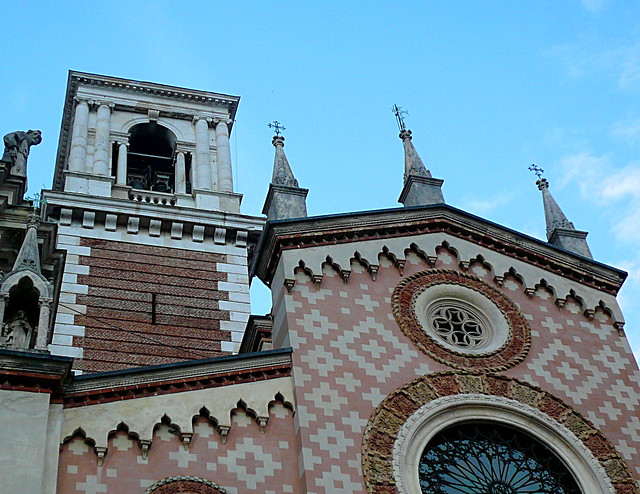 [A detail of the original church still visible on the right part of the Sanctuary. It was later enlarged and renovated. ]

From that moment, the mother of Jesus became the patron saint of Vicenza and the image of the Virgin of Monte Berico is the most venerated by local people.

The interior of the church are finely decorated and the main altar sort of reminds orthodox churches with several red lamps hanging from the roof. The statue of the Virgin, ornated with precious jewels, looks at churchgoers with an expression of motherly affection and protects several people under a majestic blue mantle covered with sparkly stars.

Among the most valuable artistic properties of the Sanctuary, there is a giant painting of Paolo Veronese, one the most famous and esteemed Venetian artist of the 16th century. La Cena di San Gregorio Magno, this is how the painting is called, was severely damaged during the Revolutions of 1848, when the Austrian soldiers raged against it, by cutting the canvas in 32 pieces. It was later restored and now you can admired it in the refectory of the Sanctuary.

Another fact that connects this hill (and the Sanctuary in particular) with wars is what happened during WWI. The front was situated on those mountains we could see in the picture with the panoramic view and people from Vicenza, scared by the incessant noise of the cannons and fearing the Austrian Army would breach the frontline, made a vow to the Virgin of Monte Berico: if she protected the city from the war, they would have celebrated her with a Mass on the 8th September, officially her nativity, and would have made it a festive day for the city.  Again, the enemy never touched the soil of the city  and still nowadays people remember to thank the Mother of Jesus with an annual ceremony on said day.

The involvement of Vicenza with the war sadly didn’t stop here: during WWII Vicenza was severely damaged by bombs and Nazis occupied the territory killing thousands of partisans and civilians with the complicity of  Fascists. When thinking about the Sanctuary and the WWII, I like to believe that the motherly protection of the Virgin was involved when my grandpa had his life saved. Mustered by the Army, he left Italy with only a camera and a small image of the Lady of Monte Berico (which my family still preserves): luckily he was sent to a front which was not as dangerous as other ones and, after a perilous journey by foot, he was able to come back home exhausted but safe.

What to visit in Monte Berico to understand this dichotomy: 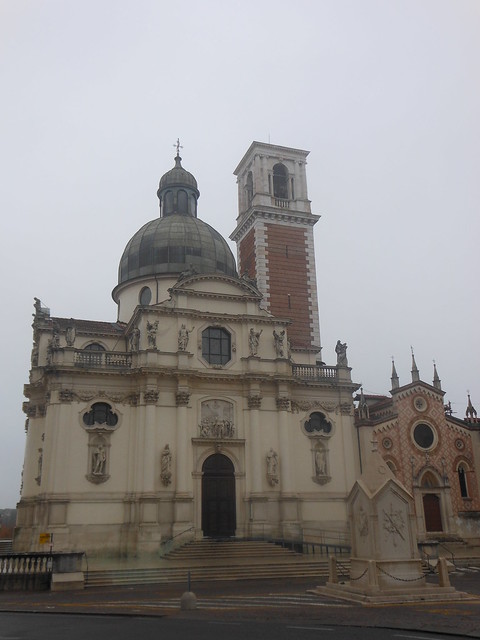 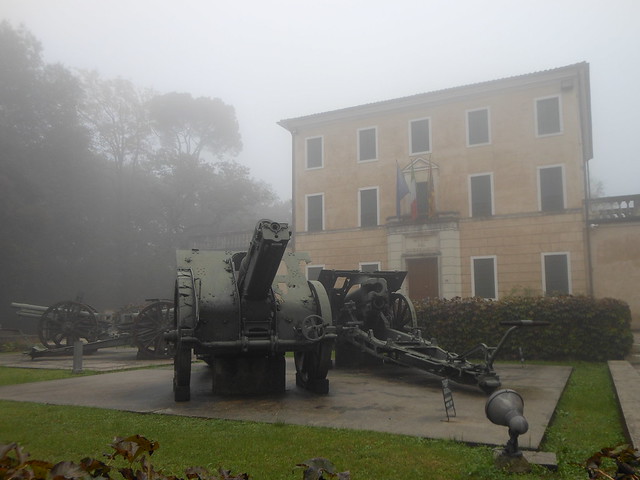 I would finish this visit of Monte Berico by starting to descend the hill by foot, walking through the famous portico that connects the Sanctuary with the city centre: 150 arches that remind the 150 prayers of Rosario, the string of knots used by Catholics to pray the Madonna. How appropriate, leaving Monte Berico with a prayer… 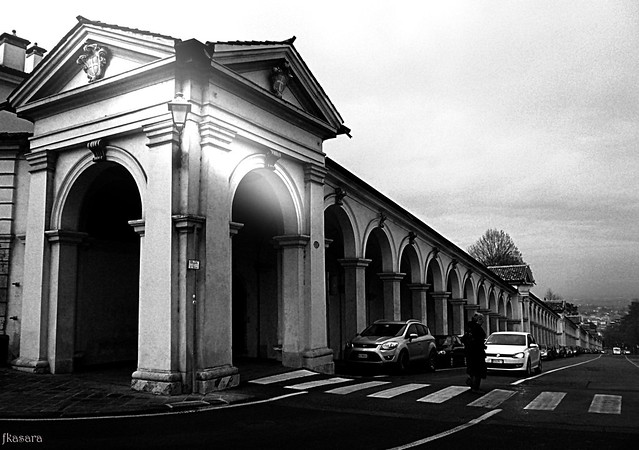 See you next time with a tour of Vicenza city centre.

8 thoughts on “Vicenza’s Monte Berico, where Saints and troubles live together”