San Gennaro, Patron Saint of the city of Naples, Italy, three times a year seems to allow a fascinating yet disconcerting “blood miracle”. Want to know more about it? Check the article!

St. Januarius, famous as San Gennaro in Italian and nicknamed San Gennà in Neapolitan dialect, is a figure that, in my opinion, perfectly represents the union of Sacred and Profane typical of this country. The coexistence of these two elements, and consequent incongruity, is what I consider important factors to understand the Italian identity, which is some sort of blending of laic stances, religious practices, superstitions, popular beliefs and ancient customs. Honestly, it couldn’t be different in a territory in which we have seen, for centuries, Popes craving secular powers and Emperors trying to secure ecclesiastical offices for their relatives.

But let’s delve more into the Neapolitan scene and San Gennaro.

Who Was San Gennaro

San Gennaro is a Saint of the so-called “first generation of martyrs”, meaning that he was among the first to be persecuted as Christians and that, as a consequence, we know very little about him. According to a recent hagiographic research, he was a bishop of Benevento, martyred in 305 AD during Diocletian’s persecutions.

The cult among the Neapolitan people started when his relics were moved from Pozzuoli, place of his death, to Naples in the Catacombs of Capodimonte; the inhabitants soon began to ask for his intercession during pestilences and natural disasters. During Vesuvius’s eruption of 472 AD, San Gennaro was officially elected main Patron Saint of the city.

Where to Find San Gennaro in Naples’s City Centre

Since his election to principal Patron Saint of Naples, San Gennaro has basically reached the status of a rockstar. You can find his image everywhere, but within the city centre the main Gennaro-centred spots are: 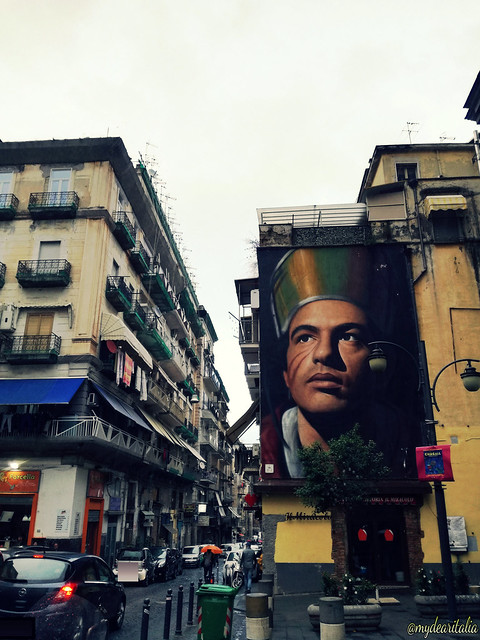 At the entrance of the Church of S. Giorgio Maggiore, located in the Forcella quarter, the street artist Jorit Agoch painted this beautiful San Gennaro using a 30 years old mechanic called – guess what – Gennaro as a model. As some sort of modern Caravaggio, who picked “normal” people as inspiration for Saints and Madonnas, Jorith chose the face of a humble worker and transformed it into the image of the city’s Patron Saint.

He worked 15 days for free and donated his art to Naples, believing it could help somehow, given that, before this, the Forcella quarter was only known for the feud between criminal clans. In Jorith’s word, art might not save the world, but this kind of paintings allows art tours and enhances the urban areas’s look. 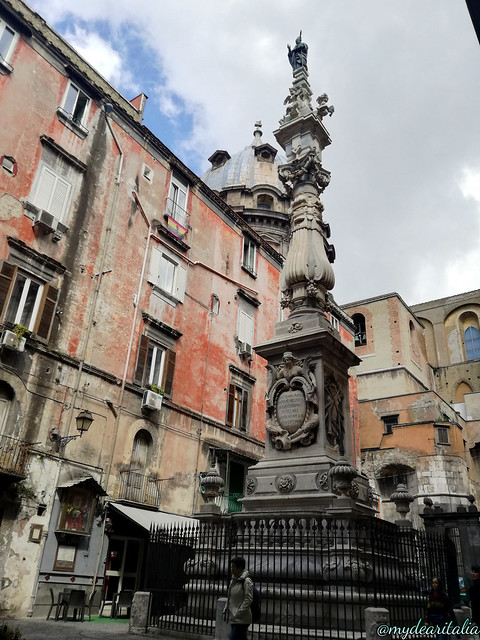 Next to the Cathedral of Naples, there’s a small square where you can find “la guglia di San Gennaro”, the most ancient of the three obelisks present in the city. It was erected in 1636 to thank the Saint, because it was believed he saved the city from the catastrophic Vesuvius’s eruption of 1631.

At the top of the obelisk, there’s a bronze statue of the Saint, at the bottom the figure of the mermaid Partenope (according to the myth, she was the city’s founder), holding a message of thanks of the city.

On a wall in the small piazza there’s even this nice street art representing San Gennaro hanging out with his pal Caravaggio.

The two are represented together, because in front of the obelisk there is the Pio Monte della Misericordia, where the famous painting “The Seven Works of Mercy” by Caravaggio is hosted. 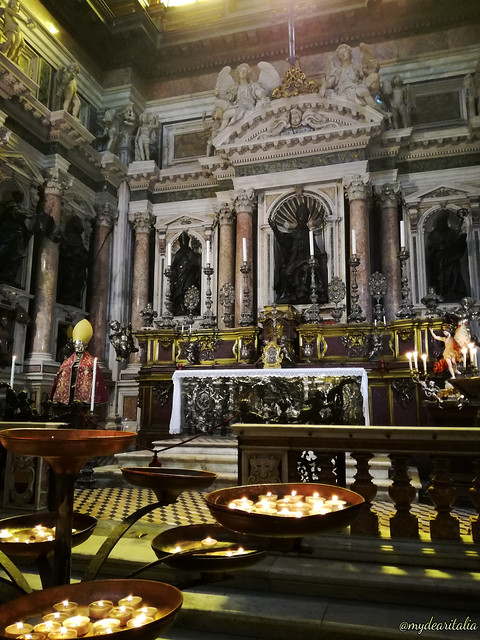 If you want to truly understand the deep impact San Gennaro has on this city and the baffling mix of Sacred and Profane his cult involves, you have to visit the Chapel of the Treasure of San Gennaro.

Despite being located inside the Cathedral of Naples, the Chapel is not property of the Catholic Church:  it’s  to be considered laic, given that it belongs, at all effects, to the city. During the scary outburst of the plague in 1526, the city of Naples promised to the Saint through an official notary deed (!) the construction of a chapel dedicated to him, if he agreed to stop the spreading of the illness. It looks like he was ok with it, given that the result is this wonderful chapel with outstanding paintings by Domenichino.

Nowadays some of the relics of San Gennaro are to be found here: inside the precious bust that you can see on the left of the previous picture, there are skull’s bones and behind the altar there are the two famous vials with the alleged blood of the Saint.

According to the legend a woman called Eusebia collected the blood of the Saint after he was beheaded and it should be exactly the one we have in the two vials stored in the Chapel.

Believers attribute to San Gennaro’s blood special powers, given that such an ancient blood, that should have already decomposed and pulverized, it’s still there in solid form. Since 1389 there’s, moreover, another peculiar phenomenon: the liquefaction of said blood, which many Neapolitan Catholics believe to be a miracle. The Church, as in the case of the Shroud of Turin, has never recognized anything miraculous about it and just consider this blood a symbol of Christian martyrdom.

The liquefaction, which happens during public ceremonies three times a year, can be witnessed to on:

What Happens during the Celebrations of the Miracle

At the beginning of the celebrations, the Archbishop of Naples takes out from the strongbox, placed behind the altar of San Gennaro, the vials.

A group of old women, called “Parenti” (literally “relatives”) sits in the front rows of the Chapel, singing aloud. Their prayers, which are supposed to encourage the Saint to allow “the miracle”, are in Neapolitan dialect, but have ancient Greek origins. The structure of the chants seem indeed to derive from the pagan initiatic rites, but the lyrics have been obviously adapted to sacred themes; this does not prevent the parenti, though, to address the Saint in a very colloquial way.

Blood of San Gennaro defend us.

Come on, bello, wake up!

If the blood liquefies, a representative of the Deputazione, a group of civilians who looks after the preservation of the Chapel, announces to the crowd “the miracle” by waving a white handkerchief from the main altar of the Cathedral.

Popular beliefs and superstitions, that have little to do with religion, come into play even in this occasion: if the blood does not liquefy, it’s considered a bad omen for the city.

The Unexplainable Phenomenon of the Blood Liquefaction

Scientifically speaking, what do we know about this phenomenon? Well, not much, to be honest.

Given that the vials are sealed with a very strong mastic, it is impossible to open them to have the content examined. We only know that it’s real blood, thanks to a spectrographic analysis, and that the vials are indeed really ancient, dating back to the Paleochristian era.

It would not be that surprising nor impossible to attribute that blood to an ancient martyr, given that at those times collecting the blood of those who were killed in the name of Jesus Christ was a common practice. What is surprising is that such an ancient blood should have already putrefied and pulverized and that it acts oddly and of its own accord: it liquefies, changing its volume and weight, regardless of the external temperature and the shaking applied on the vials during the celebrations.

Some scientists speculate that there was the intervention of Medieval Neapolitan alchemists, who might have added peculiar substances that would make the blood liquefy if you shook it (this would not explain, though, why sometimes it is already liquid when it lies still in the strongbox and why sometimes it does not liquefy, even if shaken repeatedly by the priest).

Another theory suggests that it is just normal blood, which does not pulverize because the gases of the decomposition (ugh) are trapped inside the vials, which are hermetically sealed.

Since a more in-depth analysis is not possible at the moment, we will just focus on the popular cult, which is not less fascinating and puzzling.

The cult of the blood of San Gennaro is a Neapolitan custom, which is a rich mix of religious, secular, pagan and undeniable folkloristic elements.

Who Can Go Witness to the Miracle

Given what we have said about the origins of the cult, it is quite clear that no one is banished from witnessing. There are indeed some pious people who might feel offended in some way by an excessive afflux of tourists, but the majority of them is used to it and does not mind. The whole event is quite theatrical in its nature and smartphones and sightseers, weirdly, do not seem to be out of place.

Have you ever been in Naples? Have you witnessed to the Blood Miracle of San Gennaro? Let me know in a comment!