It’s January and the DolceVitaBloggers LinkUp – organized by Kristie, Jasmine and Kelly – is back again. This time with the topic “Best Italian Book”. 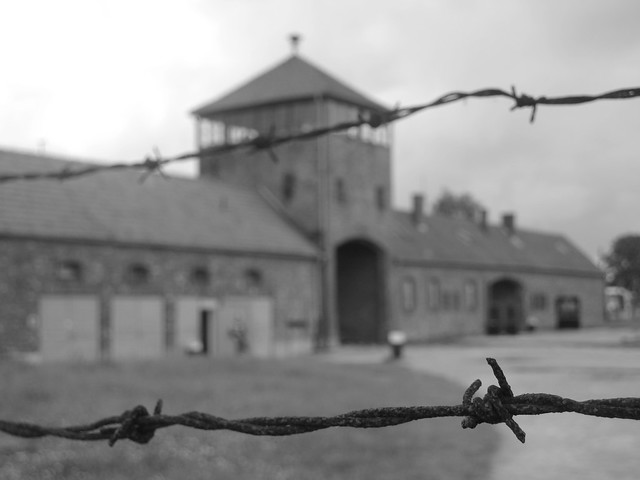 When asked what’s one’s favourite book, many people prefer to make a list, instead of naming a single title. Probably they have yet to meet their book. I am lucky enough to have already encountered mine, some years ago at school.

Cultural awareness and sensitivity are different among readers and everyone has a potential different paper soul mate out there, but I feel like this one – the one that I inappropriately call mine – goes beyond any barrier imposed by personal preferences and upbringing. Its message is universal and it’s here to talk to every human being. It’s a slap in the face to wake us from our everlasting torpor and stupidity. It’s Se Questo E’ un Uomo by Primo Levi.

Writing a review of this book is something you’re destined to fail from the very beginning. A titanic endeavour. But if I manage to persuade just one of you to read it, it will be worth it. It will be worth to fail.

It was 1943. Primo Levi was a young chemist from Turin, Northern Italy. He described himself as a 24 years old with poor judgement, no experience and a tendency of living in a dream world characterized by an abstract sense of rebellion. Just a normal young man – like the ones you come across nowadays –  except he lived in Italy, it was 1943 and in his documents appeared his status of “Italian citizen of Jewish race”. Just few years before, the Fascist dictatorship had approved the shameful Italian Racial Laws that first limited the rights of the Jewish citizens and then ended up ordering their arrest and deportation.

Primo was arrested in December 1943, when he was caught hiding in the mountains with a group of partisans, and lately sent through one of the infamous cargo trains to Auschwitz.

The book starts from here and describes the hell that he went through as a prisoner and slave in the camp until the Liberation Day.

Imagine now a man who is deprived of everyone he loves, and at the same time of his house, his habits, his clothes, in short, of everything he possesses: he will be a hollow man, reduced to suffering and needs, forgetful of dignity and restraint, for he who loses all often easily loses himself. He will be a man whose life or death can be lightly decided with no sense of human affinity, in the most fortunate of cases, on the basis of a pure judgment of utility. It is in this way that one can understand the double sense of the term “extermination camp,” and it is now clear what we seek to express with the phrase: “to lie on the bottom.”

The fact that the book is a reportage of a survivor of Auschwitz, lead many people to refuse to read it. Who wants to know the gruesome details of the atrocities perpetuated inside the extermination camps? Who has the guts to face something like that? But there are not such details. The ultimate intent of Levi was not to share this kind of information; his work – according to his words – is here to provide material for a “measured study of certain aspects of humanity”. It’s indeed a book about the human being.

With the power of observation and precision of the scientist, and the depth of analysis of the philosopher, Primo Levi investigates the dehumanization caused by the Lager that deprives the prisoners of the basic rights – freedom, dignity, identity – and even capable of blurring the line that divides the oppressed from the oppressor.

Many have been the ways that we devised in order not to die: as many as the different human behaviours. All entail a wearing battle of everyone against each other and many of them a big amount of aberrations and compromises. Surviving without giving up anything of one’s morals […] has been allowed to very few individuals, whose nature was the one of martyrs and saints (*)

What’s the amount of humanity left in a man who fights for a crust of bread and who dies by a yes or no? “Tell me if this is a man”, asks Primo Levi at the beginning of his work.

The entire book revolves around this question and that’s why I kind of despise the choice of the editor that opted for Survival in Auschwitz as a title for the American version of the book. This is not just a reportage of an Auschwitz’ survivor, this is a philosophical work, a teaching about Life. A diary of a man who has seen “the Gorgon in the face” and yet has been capable of leaving us an unforgettable lesson concerning happiness. Or maybe it’s exactly because of that, it’s when you touch the endless bottom and manage to survive that you can have such extraordinary intuitions about Life.

Sooner or later in life everyone discovers that perfect happiness is unrealizable, but there are few who pause to consider the antithesis: that perfect unhappiness is equally unattainable. The obstacles preventing the realization of both these extreme states are of the same nature: they derive from our human condition which is opposed to everything infinite.

If This Is a Man is an earthquake, an upheaval able to change one’s perception forever: once you’ll read it, you won’t be the same person anymore. I always keep it with me and  every time I feel the need to read it again, I open it and, like a Pandora’s box, every emotion of the world resurfaces. All despite one, which absence, at first, puzzles the new reader: the author’s hate for the German enemy. There’s none. “Hate is such an animalistic and brutish sentiment”, Levi lately stated, “I prefer my actions and words to be driven by intellect as much as possible”.

Like a Pandora’s box, there’s only one thing that remains trapped inside in the end: hope.

Even in this place one can survive, and therefore one must want to survive, to tell the story, to bear witness; and that to survive we must force ourselves to save at least the skeleton, the scaffolding, the form of civilization. We are slaves, deprived of every right, exposed to every insult, condemned to certain death, but we still possess one power, and we must defend it with all our strength for it is the last — the power to refuse our consent.

A fundamental read of the proportions of a sacred book.

All the quotes are taken from the American version of the book, “Survival in Auschwitz”, apart from the one signalled with (*) that was translated from the Italian version by the author of the blog post.