Do Italians listen to pop opera singers and to mushy songs? Is every Italian love song dedicated to one’s lover? Let’s debunk some myths!

Photo by grafxart photo on Unsplash

When talking about Italian songs and in particular about Italian love songs, I guess foreign people tend to identify tunes belonging to a genre that nowadays Italian people do not actually listen to. Just to debunk everyone’s beliefs from the very beginning of the entry, Italians do not actually listen to opera and tend to turn up their noses to Italian pop opera singers, like Il Volo, who even if they’re considered technically flawless, sing a genre which is considered kind of old-fashioned or even outdated.

Il Volo started to be acclaimed in Italy the moment TV and newspapers reported about their success in America and their collaborations with Barbra Streisand and Placido Domingo. In an outburst of patriotism, some enraged Italians then started to claim it was outrageous Italy had to wait a foreign validation to recognize talents like Il Volo, but the truth is there’s nothing truly that outrageous about it. Simply, this kind of genre is something that appeals foreign people, because it sounds “so typically Italian” to most of them, but it’s not what has been going on in the Italian music scene of the last decades.

A turning point in the Italian music panorama was represented by the advent of the so-called “Scuola Genovese”, the Genoese School of Songwriters, in the 1960s. Since then, a certain traditional and operatic way of singing has been kind of abandoned as virtuosity was seen as a way to hide and mess up with the “message” and the focus was put on the importance of the lyrics. Still nowadays, if you want to show you have very good taste in music, you have to claim you listen to Genoese songwriters like the immortal Fabrizio De Andrè, the refined Gino Paoli or the late Sergio Endrigo.

I would love to say that nowadays common Italians still have such a fine music taste, but, sadly, our record labels are not prone to promote certain kinds of musicians anymore and the younger generations are way too engrossed into foreign pop music and the unconvincing Italian rap scene to even consider this kind of heritage. Certain chansonniers’ songs of the post Genoese era still remain, though, and even if they do not all belong to said movement, they have a quality in the lyrics that has made them immortal and that even young Italians know by heart.

Today I will list five eternal songs focused on the theme of love and I will debunk another belief: not every Italian love song is about passionate, romantic and mushy stuff. There are so many aspects of love worthy to be shared in a song!

Baglioni is probably the most melodic songwriter of the bunch that I’m presenting today and even if he doesn’t belong to the group of the Genoese chansonniers, he was surely influenced by them as he learned playing guitar on their songs.

Questo Piccolo Grande Amore was crowned as the best selling single of the Italian discography and it’s about a young love and the marvel and trepidation a youngster feels when he discover such a new and exciting sentiment.

La Costruzione di un Amore had a peculiar story, since its popularity grew over time, almost like its lyrics suggest: love is something that takes time and work and that makes you sweat. It’s hard work and sometimes the price you have to pay is higher than the immediate outcome, but if you keep working on it, love can transcend and reach incredible heights. 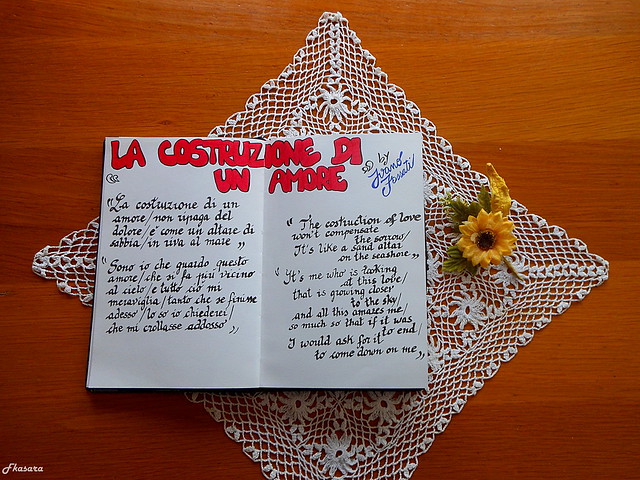 The song was written by Ivano Fossati, an author belonging to the “second wave” of the Genoese songwriters and it was first sung by her then fiancé Mia Martini, one of the best singer this country ever had.

Here we are back with Claudio Baglioni. He wrote this song in 1982 when his son was born and he dedicated it to him. Avrai, literally “you will have”, is a recurring word in the lyrics that allows the author to list to his son all the things that he will have and experience in life.

You will have a seat where to rest / and empty hours like chocolate eggs / and a friend who will disappoint, betray and deceive you / You will have / the time to go far / you will have my own sad hope / and you’ll feel like you have never loved enough.

This song opens a window on the role of the father and educator and it’s surely a great declaration of love to dedicate to one’s offspring.

Leave to Gino Paoli, one of the main exponents of the former Genoese school, the job of describing sexual love in such a refined and delicate way.

As Gino said, one will never be able to find the right words to describe the climax in a effective way, so the trick consists in illustrating what happens around the couple, in the room, during said moment. 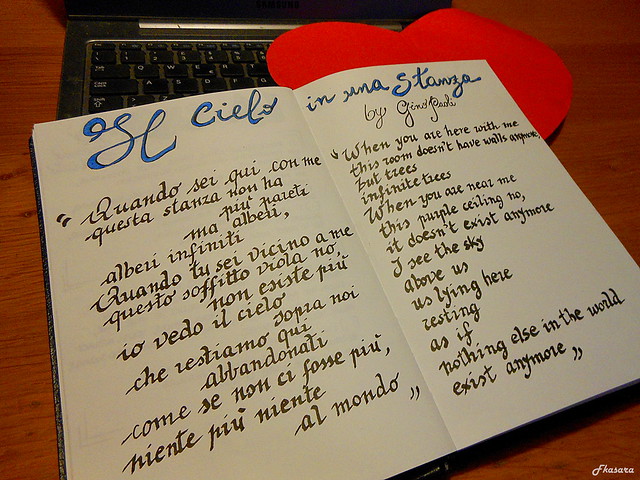 This amazing song was even translated in several languages.

I think many Italians will agree with me when I say this is THE love song. 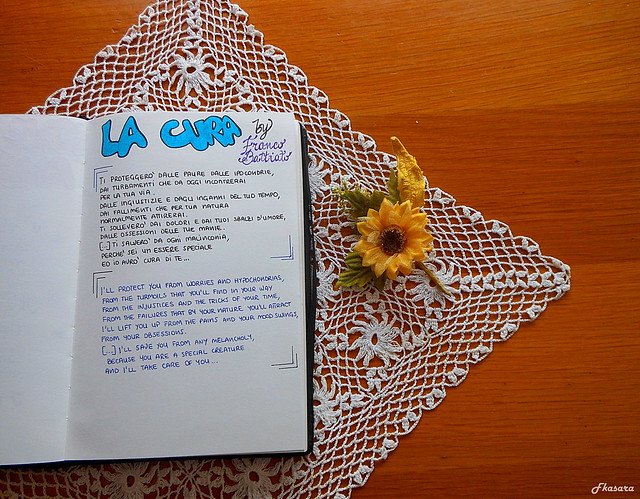 Many  interpreted it as a declaration made by a lover to another, some stated that the intention of Battiato, the author, was to encourage people to love themselves, some others thought it is a declaration of love the “soul” makes to the “body”. Truth is that, as all the songs, it was born from the pen of the author and then it went its own way as listeners gave their own interpretation.

As a general rule I would say that it’s a song about “universal love” and that explains how love is our only cure.

Did you know any of these songs? If not, I think you’ll need a few listenings before you will be able to truly appreciate them. Then, I would love to hear your opinion and your favourite song of course 😉

13 thoughts on “5 Italian love songs every Italophile should know”