Along with Rome and Venice, Florence belongs to the group of the “Big 3 Touristic Cities”. Some people complain about the themed park – kind of entertainment the city offers and ask for a more authentic experience. In this article you’ll find what you have to do if you want to avoid the crowds and get a glimpse of Florence’s true Italian soul. 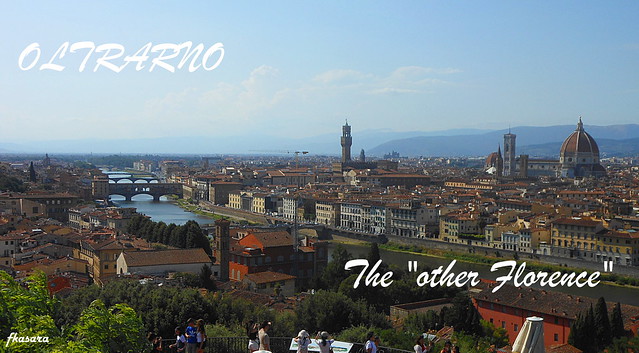 I have recently come back from Florence and after having posted in several social media about my trip, I got asked by quite a few people if I would really recommend it. They were dubious because of the several contrasting opinions they had heard. I was not surprised by this question, as by reading the articles of some influential travel bloggers around the Internet, I have seen quite a few raised brows toward the Medicis’city.

Well, honest opinion? There’s no way I’m going to discourage people from visiting Florence. BUT. I totally get what people mean when they say it’s “too touristic”. There are too many restaurants with sad tourist menus and cheap gelato parlours, but this doesn’t mean Florence suddenly loses its historical and artistic value. You just have to look under the surface and take a bit of time to do some research before visiting: you’ll learn about cultural itineraries that are not that famous nor crowded, but not less fascinating.

Here you are my suggestion:

OLTRARNO, THE AREA ON THE LEFT BANK OF RIVER ARNO

If crowds overwhelm you, focus on the area located on the left bank of river Arno, the so-called Oltrarno. Tourists usually go there to reach Piazzale Michelangelo, from which they can take the classic postcard-pic of Florence and all its bridges, but it’s not all you can do there. For those of you who desire a more “authentic” experience, this is actually a great neighbourhood to explore, as Oltrarno is defined “the other Florence”, the one truly belonging to Florentine people. By roaming around Oltrarno’s districts of San Frediano, San Niccolò and Santo Spirito, you’ll get to see several artisans’shops and “maestri d’arte” who carve wood and work gold, leather and ceramic.

SOME TOURISTIC SPOTS IN OLTRARNO: 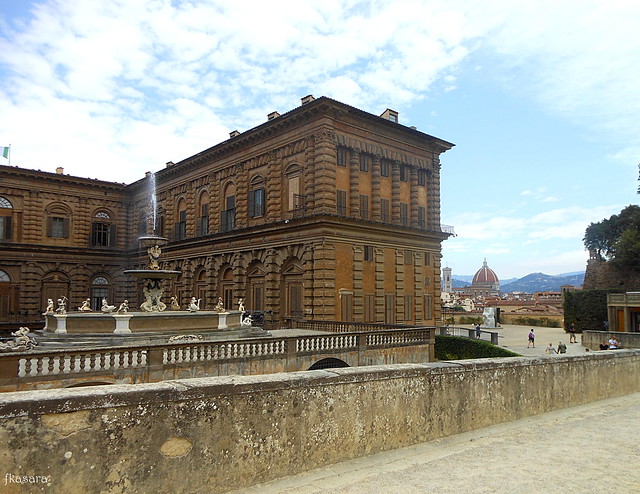 The most important Florentine palace is located in the Oltrarno’s area and it’s the famous Palazzo Pitti ( € 8,50). Palazzo Pitti belonged to the Pittis, the Medicis, the Lorenas and to the royal family of Savoia when Florence used to be the Italian capital city (1865-1870). The austere aspect of Palazzo Pitti is mitigated by the annexed Giardino di Boboli, which belongs to the UNESCO heritage and is the public garden of the city of Florence. 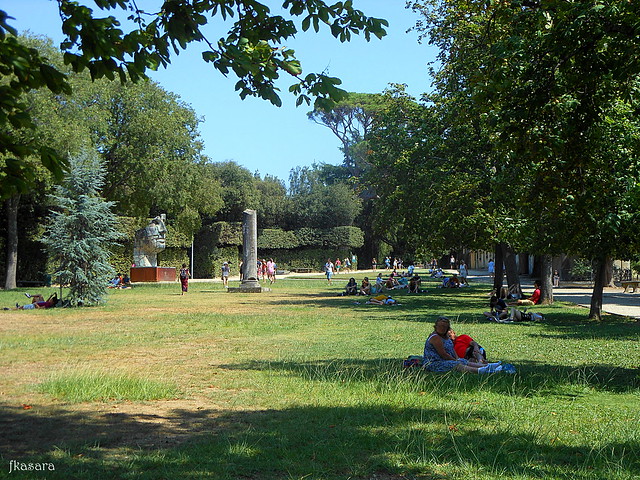 Giardino di Boboli (€ 7) is one of the finest examples of Italian gardens and I really love the fact that it’s like wandering in an open museum, where statues and Roman antiquities are scattered across it among hedges and lemon trees. 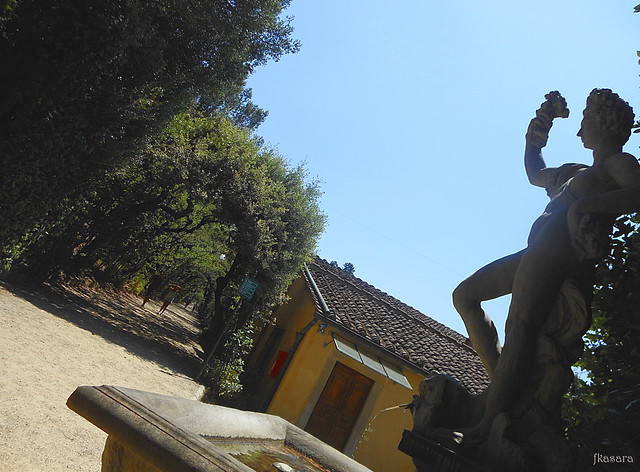 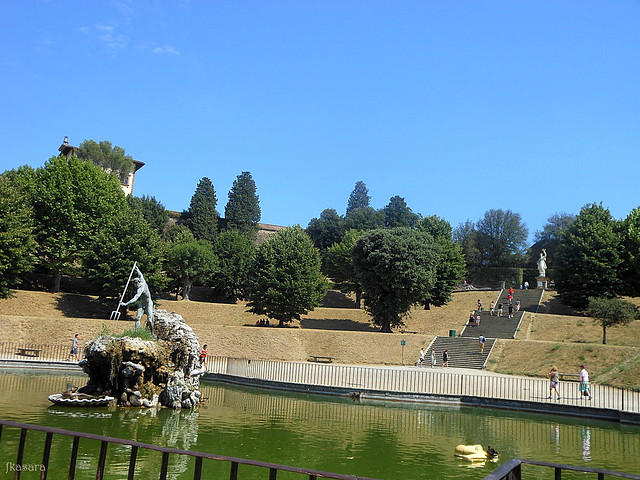 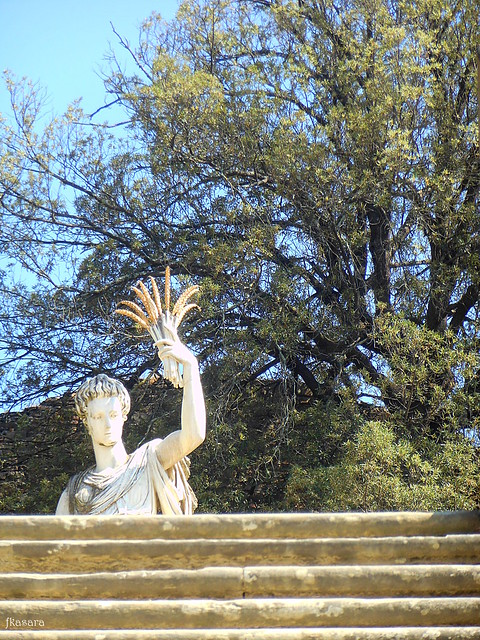 You can find tubs coming directly from the Baths of Caracalla in Rome and also the famous Prisoners by Michelangelo, that nowadays you can admire near the David at the Galleria dell’Accademia, used to be here. I’ve also heard that it was some sort of “botanic laboratory”, as well as the first place where potatoes were cultivated after they came from the New World! 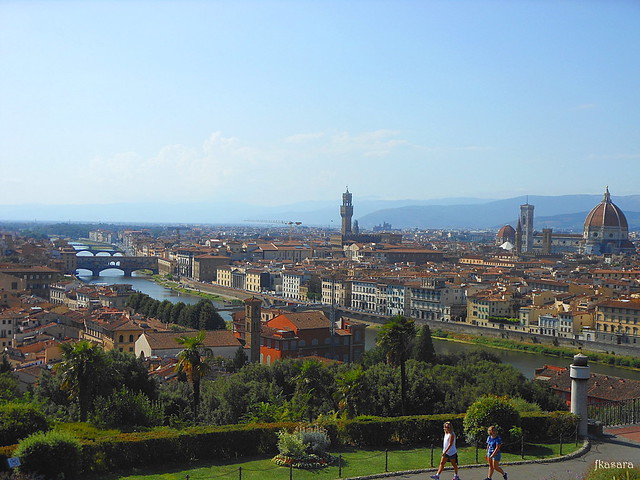 As mentioned before, Piazzale Michelangelo is probably the most touristic place in Oltrarno. Lots of people climb the only hill within the city to reach this sort of natural balcony upon Florence, where it’s possible to take the classic panoramic picture of the Arno with all its bridges and the most famous monuments in the background. Don’t miss it! 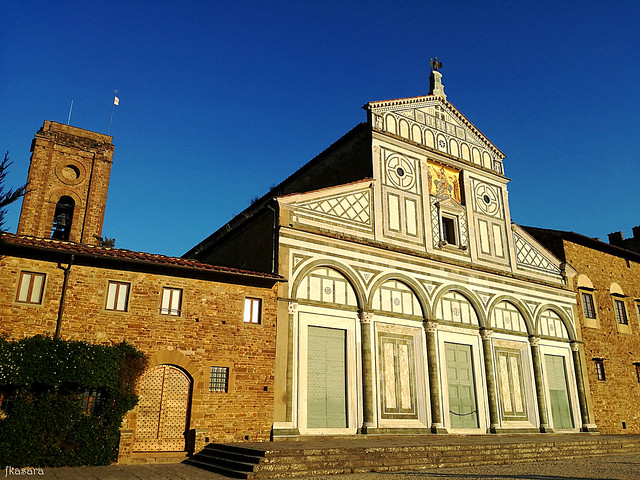 This is by far my favourite spot in Florence, not only for its artistic beauty and the wonderful view upon the city, but also for the welcoming atmosphere you breathe in there. The majority of the churches within the city has converted into hotspots for tourists and, as such, you can access to them only by paying a ticket [which is sad]. Believe me, I do understand the importance of collecting money for financing restorations, but acting like this is neglecting completely the Evangelical message (they are churches after all) and the intent of those who built these churches in the first place. So yeah, I’m not impressed.

If you go to San Miniato, though, you will be welcomed with open arms. Why is that? Well, the abbey is run by Benedictine monks, whose rule has always been to greet and help everybody, so, as long as you are not dressed in a bathing suit and you are respectful, you are welcome, no matter which is your God. 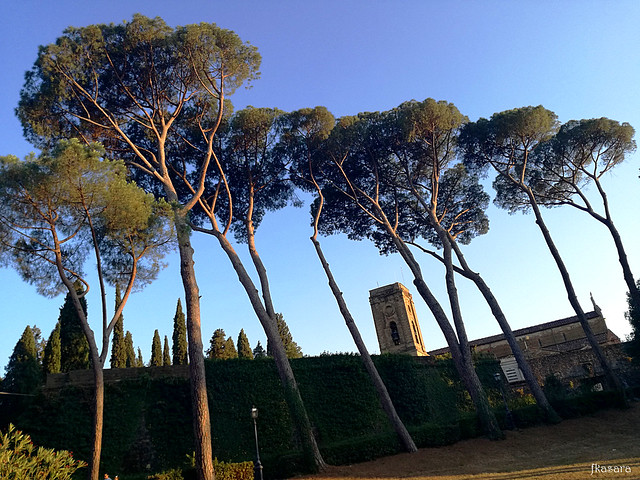 Benedictine monasteries and abbeys are quite widespread in Central Italy since St. Benedict was born in the Umbrian city of Norcia (the one that you probably saw in the news as it was hit by the earthquake of last year) and lived and operated in Montecassino, which lies South of Rome. The so-called “motto of St. Benedict”, which is “ora et labora” (pray and work) is followed by these white-dressed monks, who called themselves Olivetans.

The Olivetan Congregation consists of Benedictine monks particularly devoted to the cult of the Virgin Mary and extremely passionate about arts and culture (and you can tell by their environment that they truly are).

What’s particularly interesting and fascinating about this specific congregation of monks of San Miniato is that they give people the opportunity to be spectators of their Vespers, characterized by Gregorian chants. Why is that so interesting? Well, when listening to Gregorian chants you basically go back in time and witness to the birth of the worldwide famous “canto all’italiana” (Italian singing).

The liturgical chants represent the essential core of the Medieval musical art and laid the foundation  for the study of rhythm, melody, tone and the theory of singing. Hence the Belcanto.

Make sure to be there at 6.30 pm to listen to these angelic voices: just enter the church and go down the steps to reach the crypt, which is below the presbytery.

Actually going up to the Abbey during this time of the day is the best thing: other than listening to the Evening prayers of the Vespers, you will be able to appreciate Florence from above during the so-called “golden hour”, which is a priceless wonder. 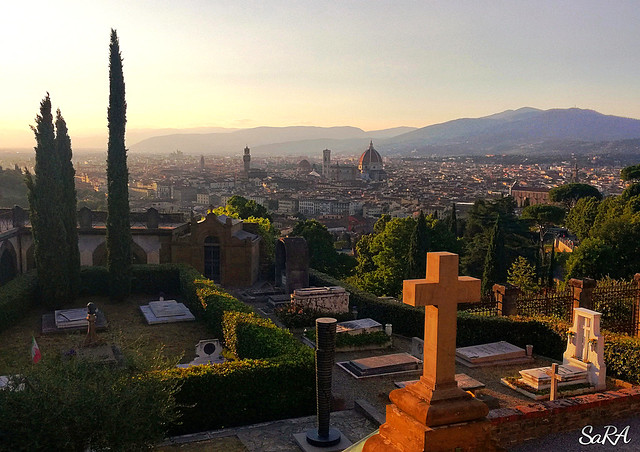 Florence’s view from San Miniato. You can’t actually see all the bridges like from Piazzale Michelangelo, but I prefer this view nonetheless. In front of the abbey, there’s also a small cemetery where some celebrities, like the author of Pinocchio, are buried. 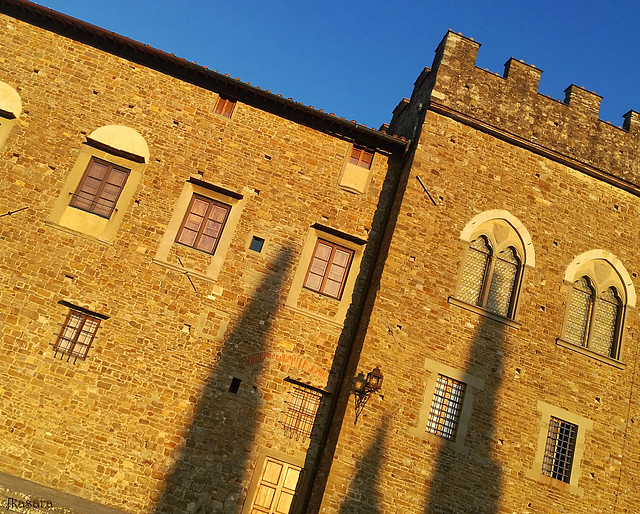 The reflection of cypresses during the golden hour 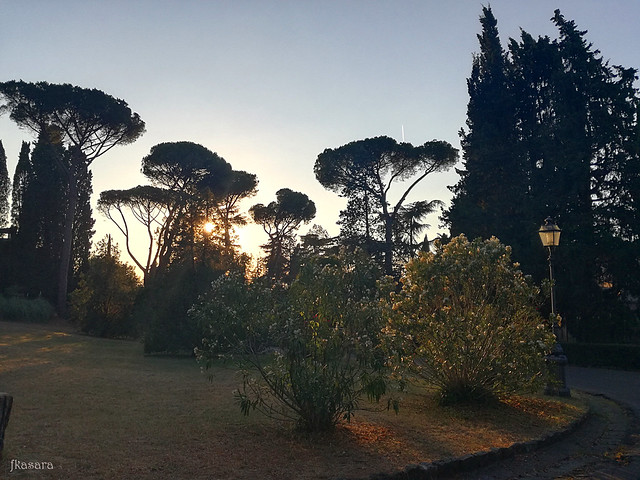 Being Benedictine monks also devoted to work, they sell some of their products in their adjacent shop. They make candles and extract honey and they have a chemist that make essences and other stuff for them.

Their honey is very good, but I also recommend you to try their gelato, which is said to be the best of Florence. I have not actually tried all the gelato parlours of the city to verify this fact (!!), but I can honestly say this one is really good: creamy, soft and with a natural colour (not like the fluorescent stuff I spotted around town).

Have you ever been to Florence? Did you visited this part of the city? Let me know in a comment!

12 thoughts on “Florence’s Oltrarno: a less crowded itinerary for the benefit of eyes, ears and soul”