Jump aboard a ferry boat with me and let’s explore some fascinating towns of Lake Garda from a very unique perspective! 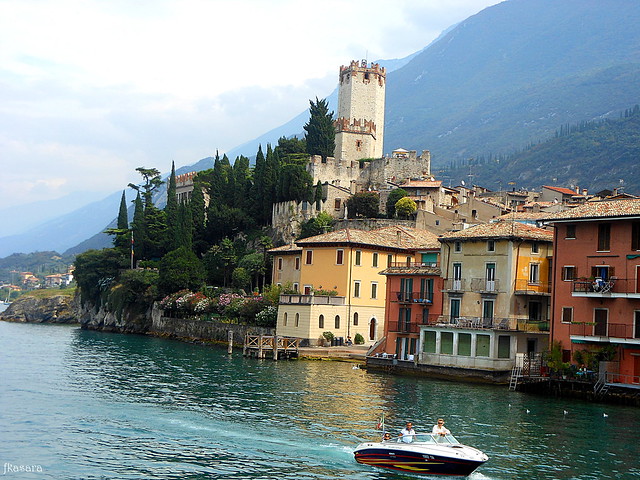 At the beginning there was George Clooney that, with his thrilling Hollywood self, blessed the inhabitants of Laglio and brought Lake Como to the attention of the world. What we don’t know or fail to mention, though, is that way before Mr Clooney there were Maria Callas, Vivien Leigh and Laurence Olivier that, as their glamorous holiday destination, preferred another lake of the Italian Northern district, Garda.

Garda, 52 km long and with a surface of 368 km2, is the largest Italian lake. Since we are in Italy and things are always inexplicably complicated, it is administrated by three different regions: Lombardy on the Western side, Veneto on the Eastern and Trentino up in the North. The favourite pastime of the Garda lovers is claiming which one of the sides is the best and personally I opt for the Western which is hilly and wilder in comparison with the flatter Veneto’s side.

If nowadays Lake Como is well-known among the English-speaking countries, Lake Garda is some sort of “German colony” and it’s quite common, by roaming around the lakeside towns, to find store- and shop signs in the Teutonic language and people wearing white socks and sandals (that’s how we are able to recognize Germans in Italy).

German are definitely lake fans and seem to love Lake Garda with a passion. And I truly understand where all this fascination comes from:

There are several ways in which you can explore the lake (if you travel by car remember that the western side is one-way and full of galleries excavated in the rock and that the eastern side is HIGHLY congested), but taking the ferry and navigating the lake in its entirety represents a great opportunity to explore it under a fascinating perspective. The ferries have different routes and there’s the possibility to take the ones that carry the cars aboard.

The ferry trip I will show you today is the one that goes through the entire lake, making several stops, from South to North.

ROUTE: the ferry zigzags from a side of the lake to the other

Here you are my trip with pics and info about the various towns we spotted from the lake: 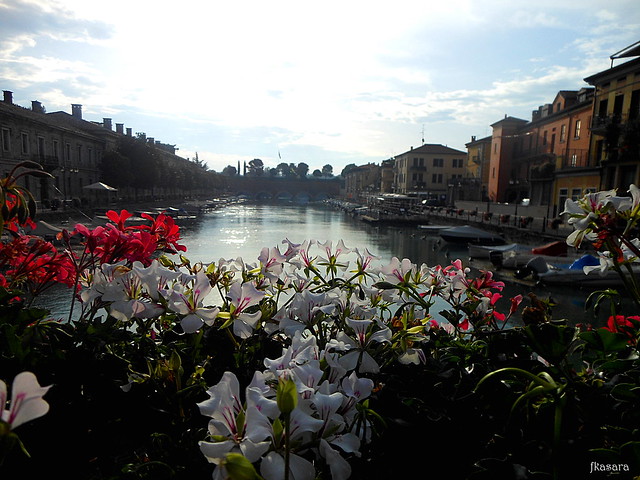 A great starting point for a ferry trip on Lake Garda is, without a doubt, Peschiera, which is located on the south bank and from which port is possible to reach every town located on the lake. 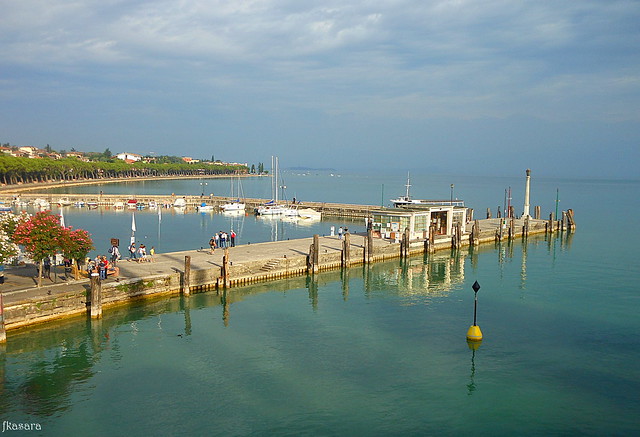 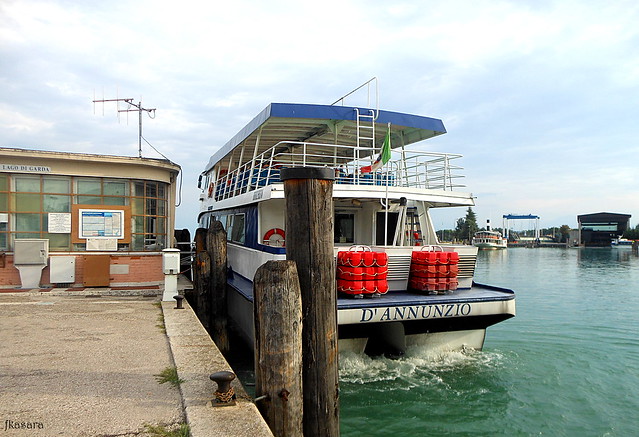 I jumped aboard the ferry D’Annunzio, named after a famous Italian author and poet of the XX century, and departed for my little adventure! 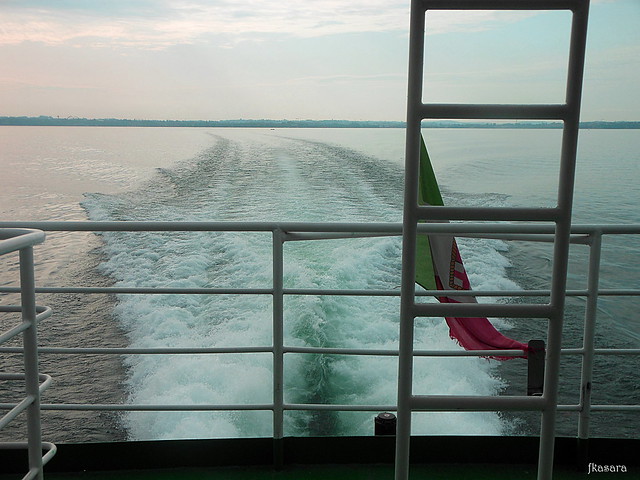 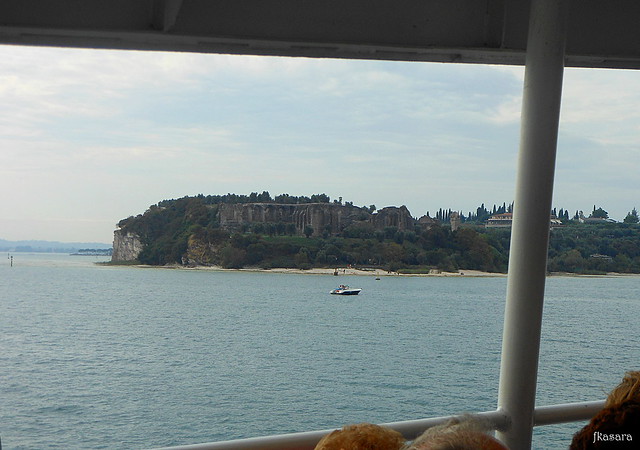 Located on a thin peninsula on the Lombardy’s side, Sirmione is probably one of the most famous Garda’s destinations, essentially for its thermal station, the Scaliger Castle and its archeological area, called “Grottoes of Catullus”. 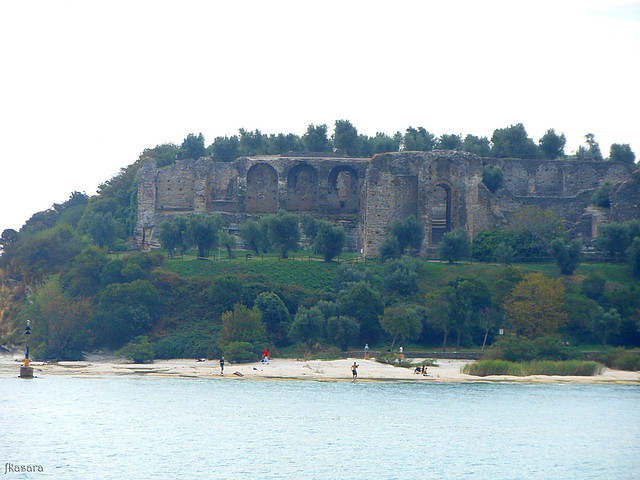 According to the tradition, right there it was located the ancient Roman villa of the poet Catullus. 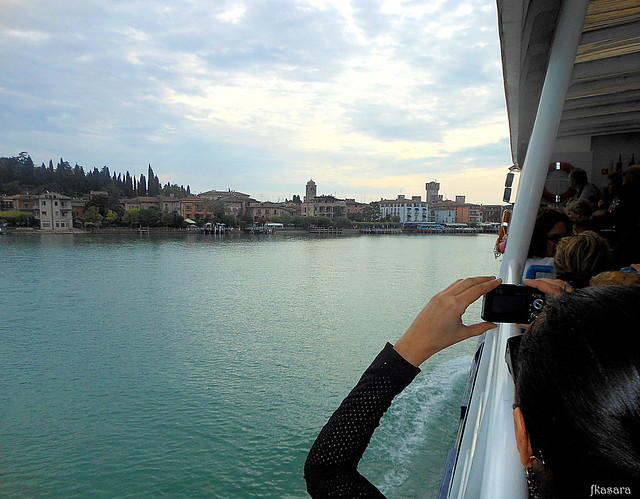 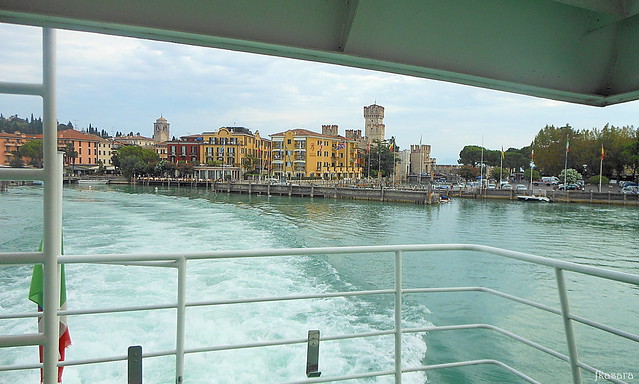 The name literally means “towers of Benaco”, being Benacus the ancient Roman name of Lake Garda. Among the most interesting things to see, another Scaliger Castle of the XIV century which hosts a museum. 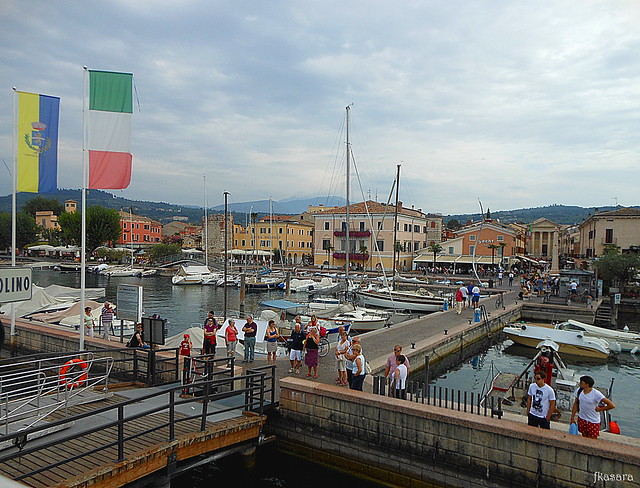 It is mainly known for the Bardolino wine that takes its name after the town. Quite popular among tourists as there are lots of camping sites. 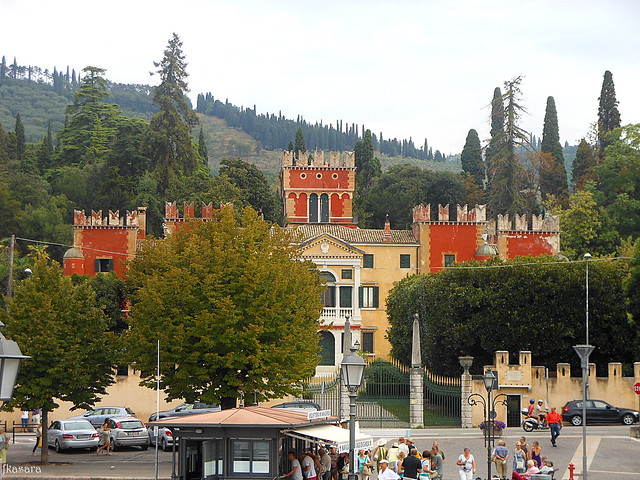 The town that gives the name to the lake. The most famous place in Garda town is the peninsula of San Vigilio, where there is Brenzoni villa which hosted several celebrities like Vivien Leigh, Laurence Olivier, Winston Churchill and Prince Charles. 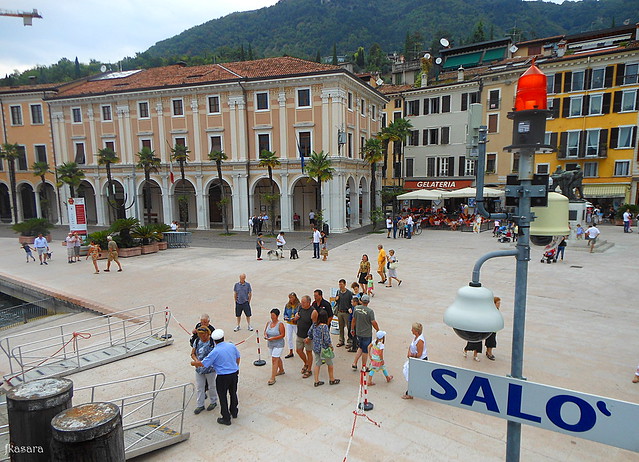 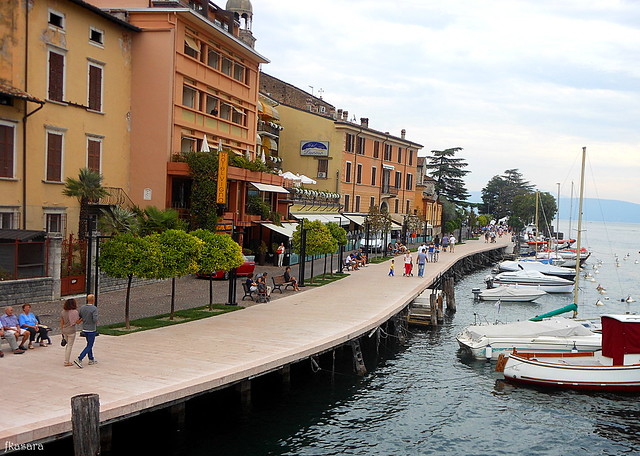 Most famous among Italians for having been the seat of government of the so-called “Republic of Salò”, Mussolini’s Nazi-backed puppet state from 1943 to 1945. 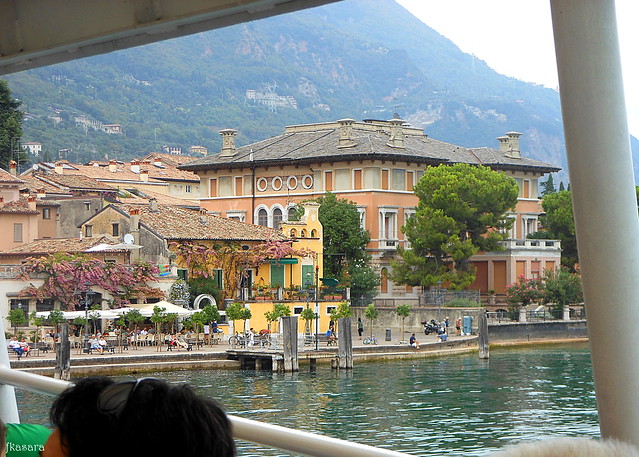 Most famous for the so-called Vittoriale degli Italiani, the villa of one the most famous and controversial Italian poets of the XX century, Gabriele D’Annunzio. I must add that he is beloved by Italian students, but this is due to his rather…bohemian lifestyle. 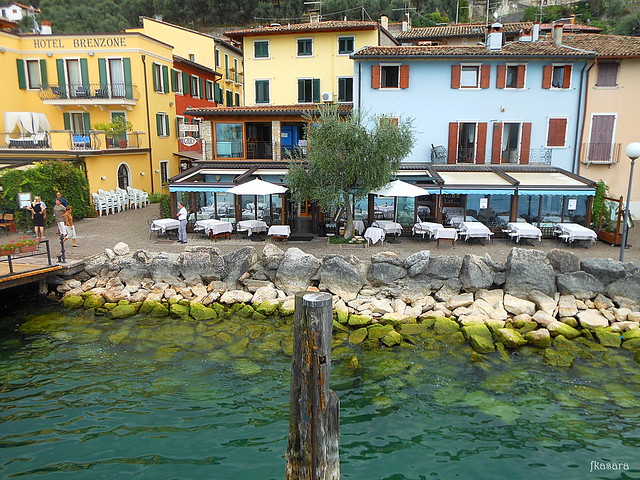 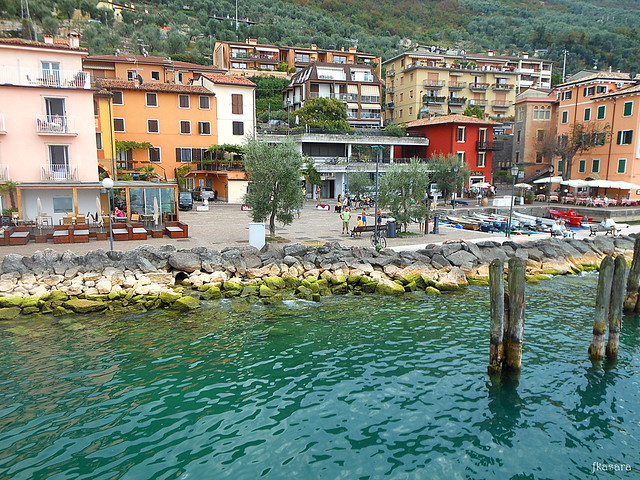 I love these colours! 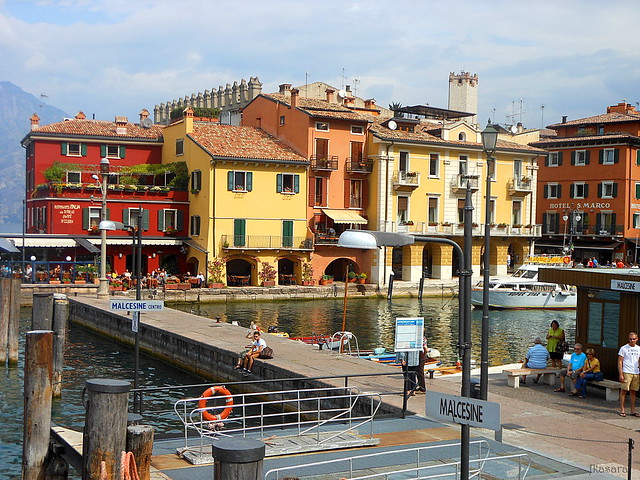 It was common knowledge that Gustav Klimt (that guy of the Kiss, yeah) came here and painted one of his most important landscapes. Too bad that it was destroyed in a fire in 1945 😦
Malcesine is now well-known for its Scaliger Castle. 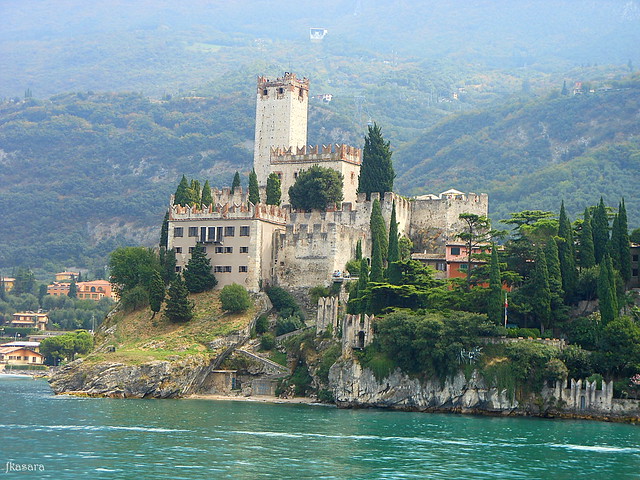 Fun fact: Goethe came here to visit and while he was drawing the castle in his carnet de voyage, he was suspected of espionage and almost arrested! 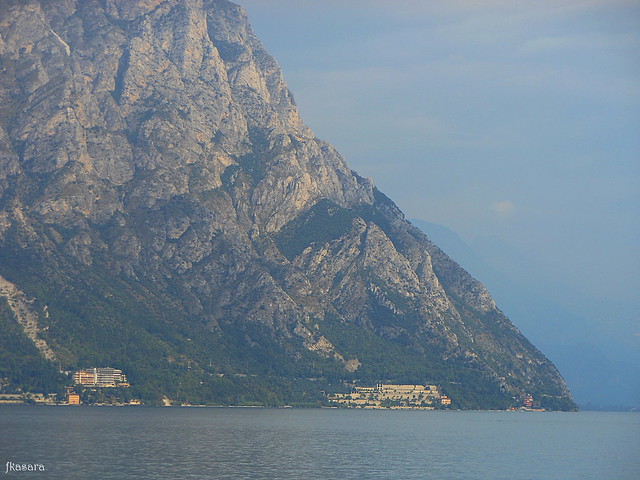 I must admit I have a soft spot for Limone. Limone is the Italian translation of “lemon” and by approaching its coast you will actually see lots of lemon trees.
Until the 40s it was possible to reach this fascinating little town only by boat or through the mountains because of its rather inconvenient geographical location (that you can easily grasp from the previous pic).
I bet you’d love Limone too, by roaming around its romantic streets adorned with flourishing bougainvilleas, but most of all once you’ll know about this fact: apparently Limone has the secret formula for a long life *gasp in shock* 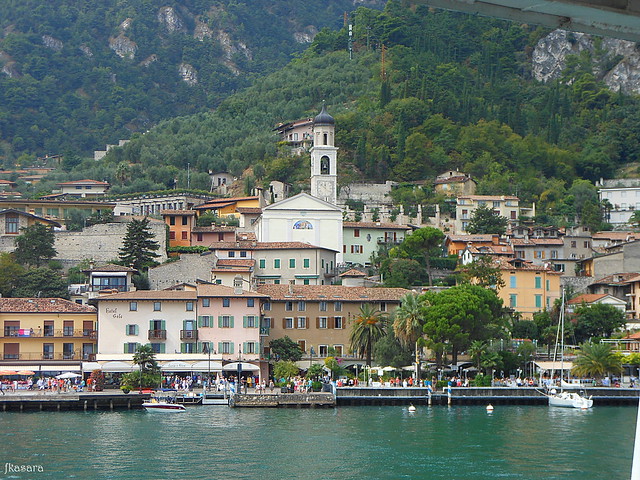 Once observed that in Limone there were many centenarians, scientists conducted some studies and discovered that local people possess a mutant form of a protein in their blood that allows them to have a lowered risks of cardiovascular diseases. This “genetic mistake” apparently traces back to a local couple who lived in the 17th century. So, if nowadays scientists are studying new medicines against heart diseases based on this protein, is entirely thanks to this people. Thanks Limone! 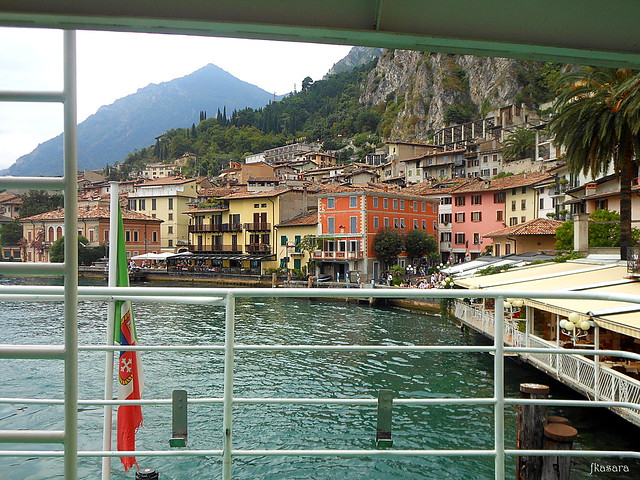 I honestly believe that, other than the genetic mutation, there must be something in the air that makes people live longer. Look at this place! 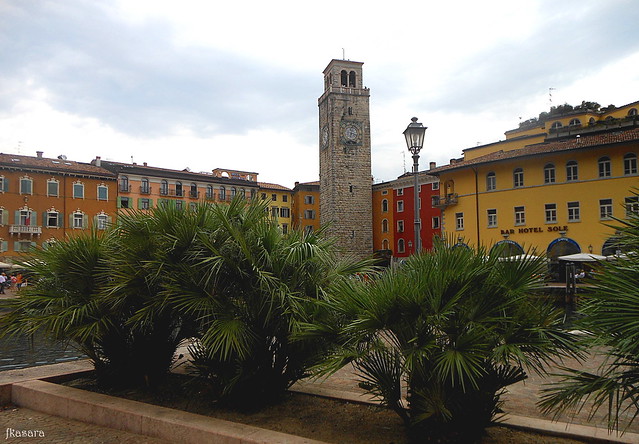 Here we are at the end of our journey! Riva del Garda is at the Northern corner of Lake Garda! Here is what I saw once I hopped off the ferry. 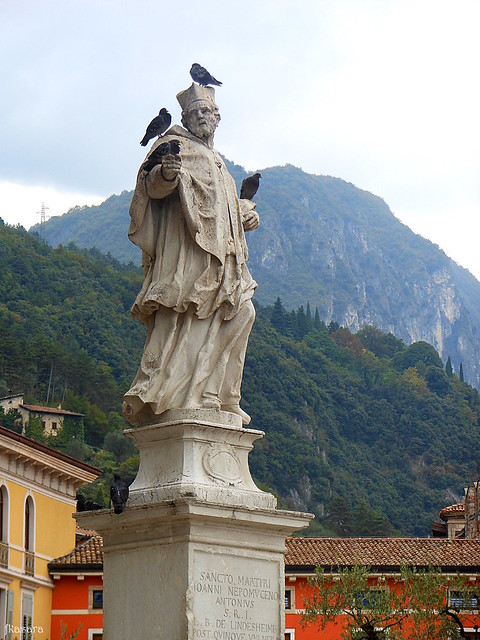 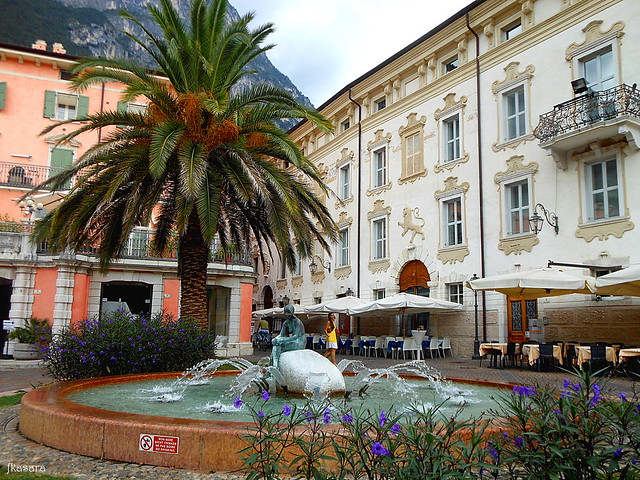 This was the complete ferry route of Lake Garda. I travelled without hopping off at the intermediate stops, but you can obviously decide to stop before. To learn how to reach Peschiera or Riva through public transports, check out this page.

Would you consider to take a ferry boat  in Lake Garda or maybe in another Italian lake? Let me know in a comment!